This past weekend was the Parade of Homes in our area of Southeast Idaho. If you aren’t familiar, the Parade of Homes is a showcase of homes held annually in several regions throughout the United States. It is often presented by the local Home Builders Association and typically showcases high-end designer homes, both new construction and remodeled homes. Ours featured 14 different homes, by almost as many builders, scattered throughout the area. Chris was under the weather so I ended up hooking up with a friend and we were able to see a few homes Saturday night that we heard were the “must-see” ones. To be honest, no house was completely my style, but I was able to find inspiring ideas in almost every single space. 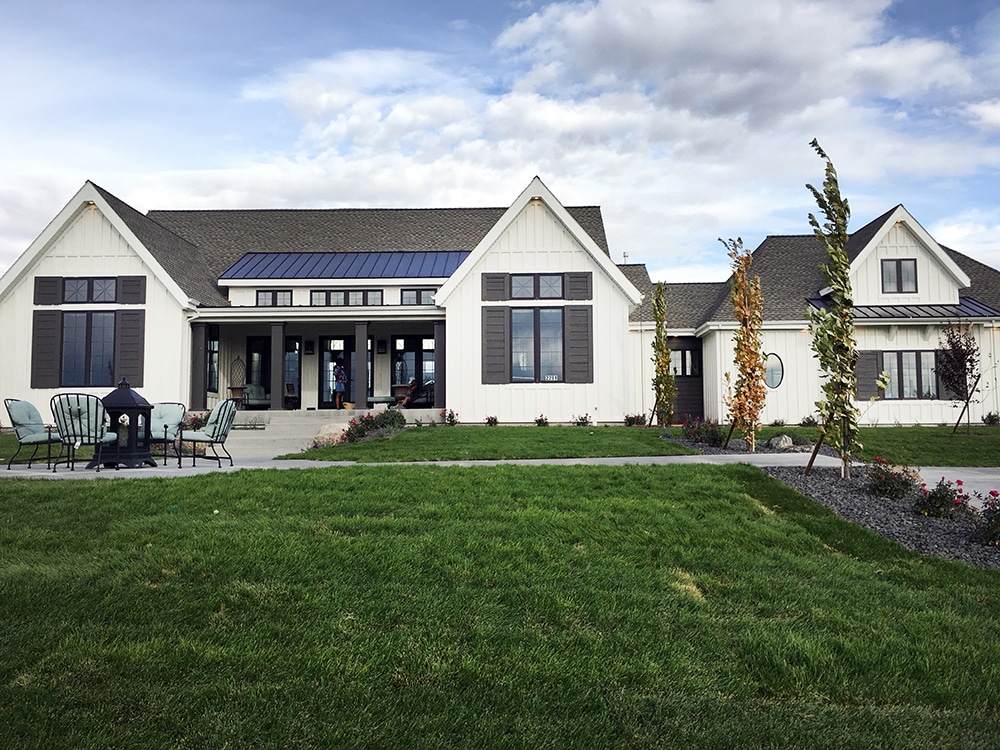 The first one we went to was by far the best. I love the board and batten exterior siding. At first impression, I thought they should have done the whole roof in metal, like the accent parts, but when I walk inside, I realized this wasn’t the modern farmhouse I thought it was going to be. But the exterior still took my breath away. The back patio was nestled under a large pitch. 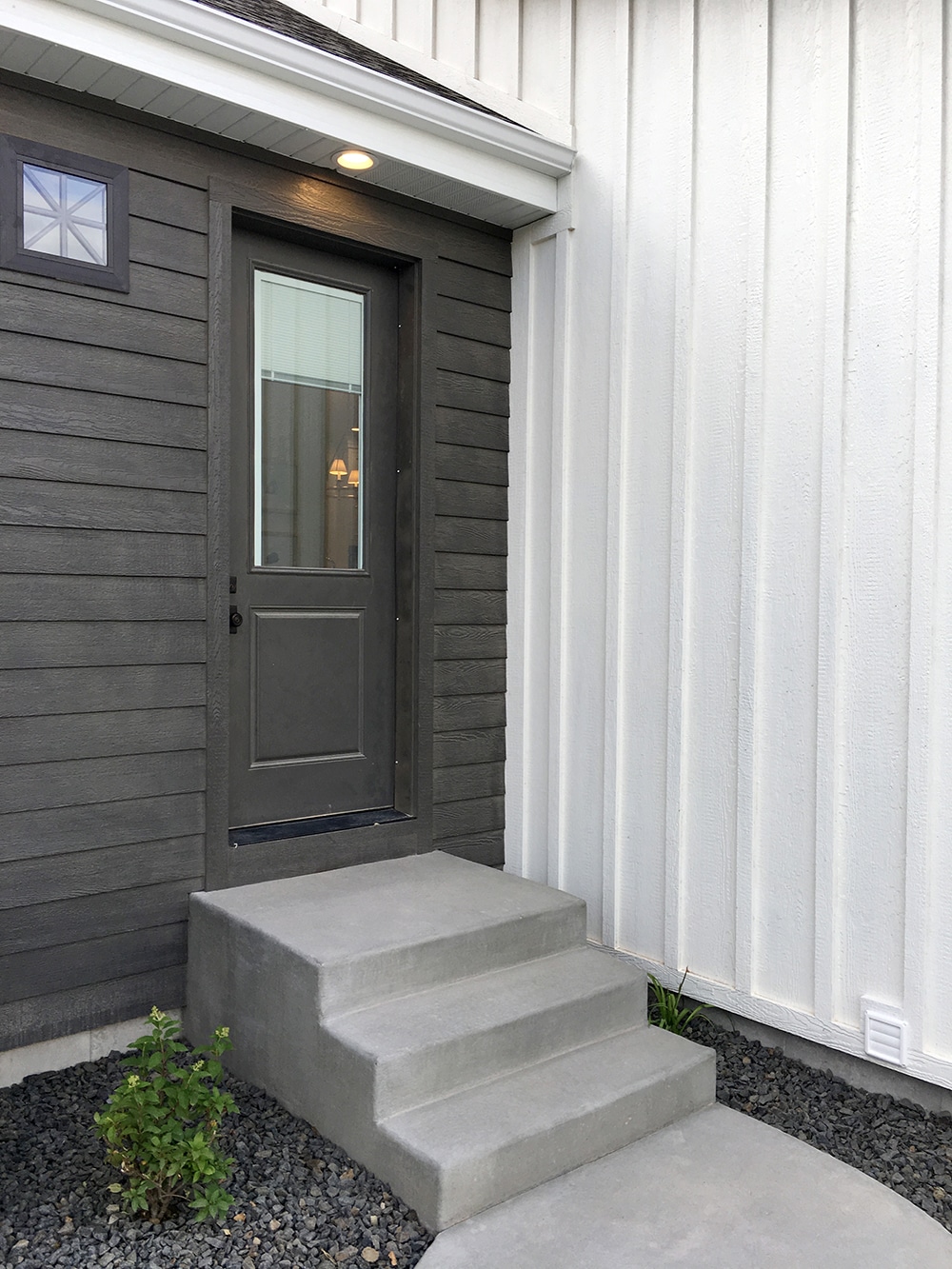 And the contrasting siding (in both color and orientation) was very cool. But like I said, the inside was an unexpected, completely different style–mostly very traditional.

I loved this hallway with a barrel ceiling leading from the master bedroom to the bold office.

Idea to steal: A gallery of ornate frames painted the same color as the walls. 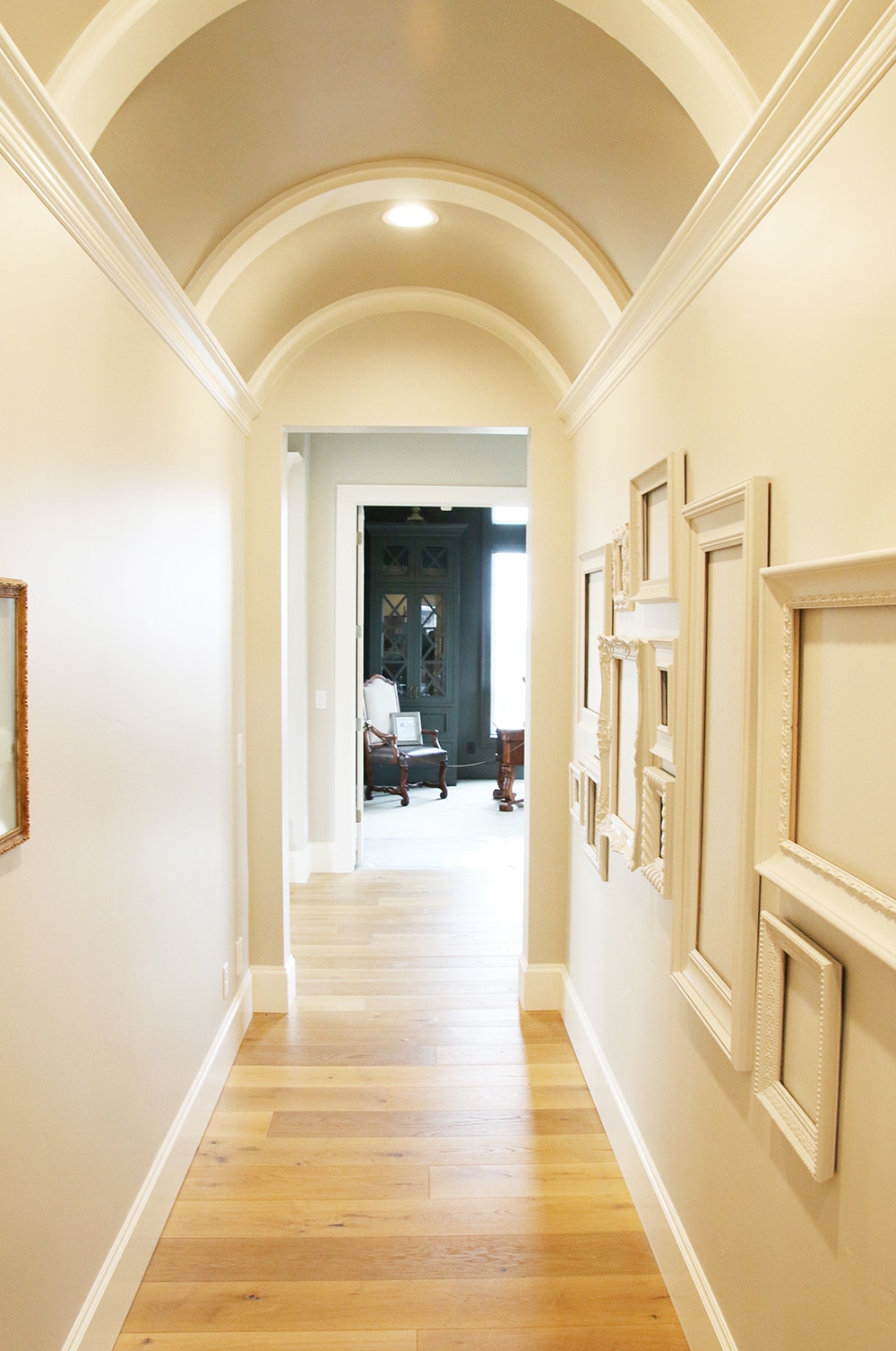 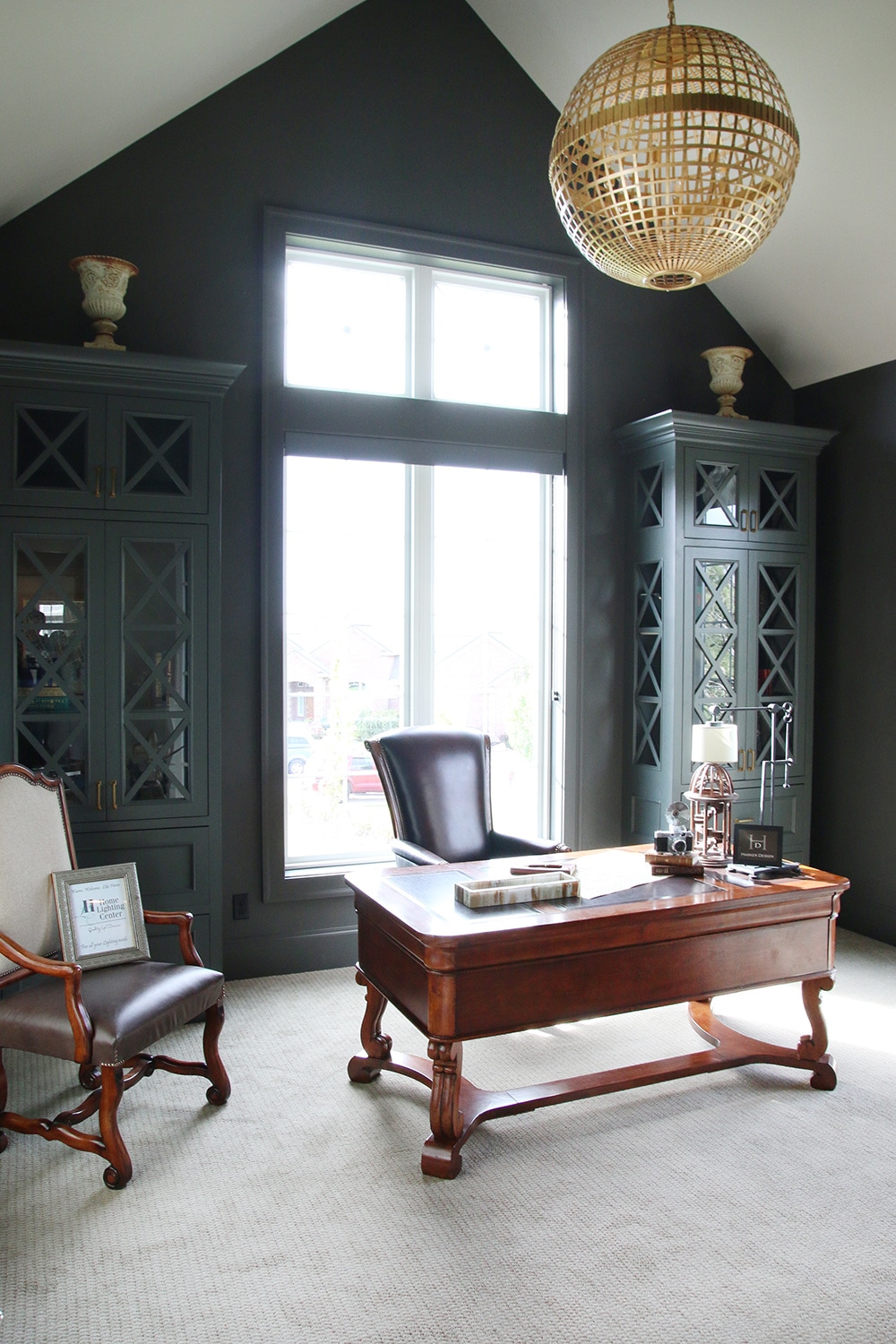 The office was a favorite space of mine. While the furniture style isn’t what I would have chosen, that wall color, the built-ins and that light fixture (goodness, that light fixture!) made me want to move in. 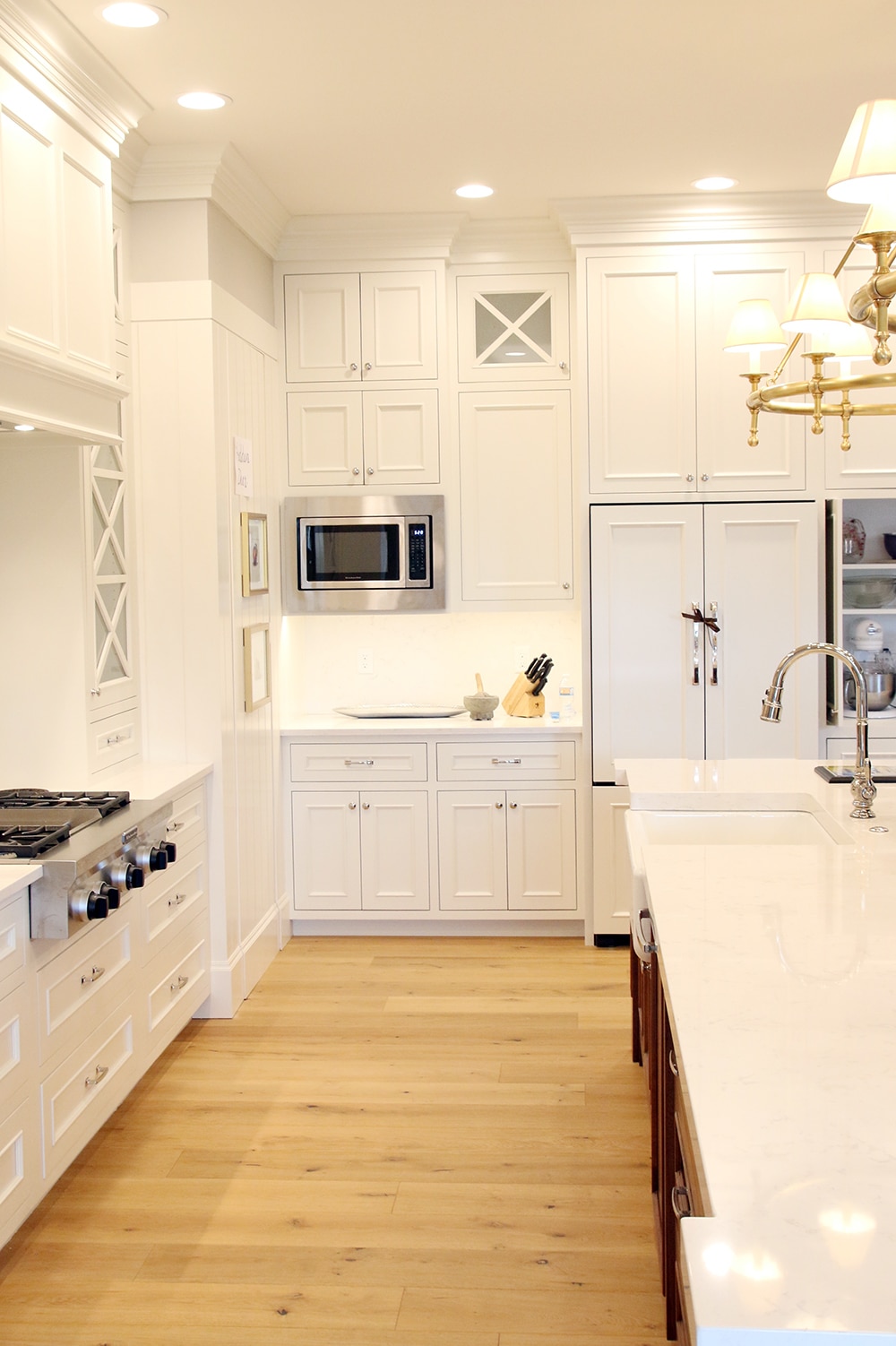 The kitchen and adjacent dining area were white and I loved seeing the exterior X windows mimicked in here. The beautiful wide planked light wood floors seem like the new standard. On the far left side, where the gold frames were mounted, was actually a hidden pantry door! 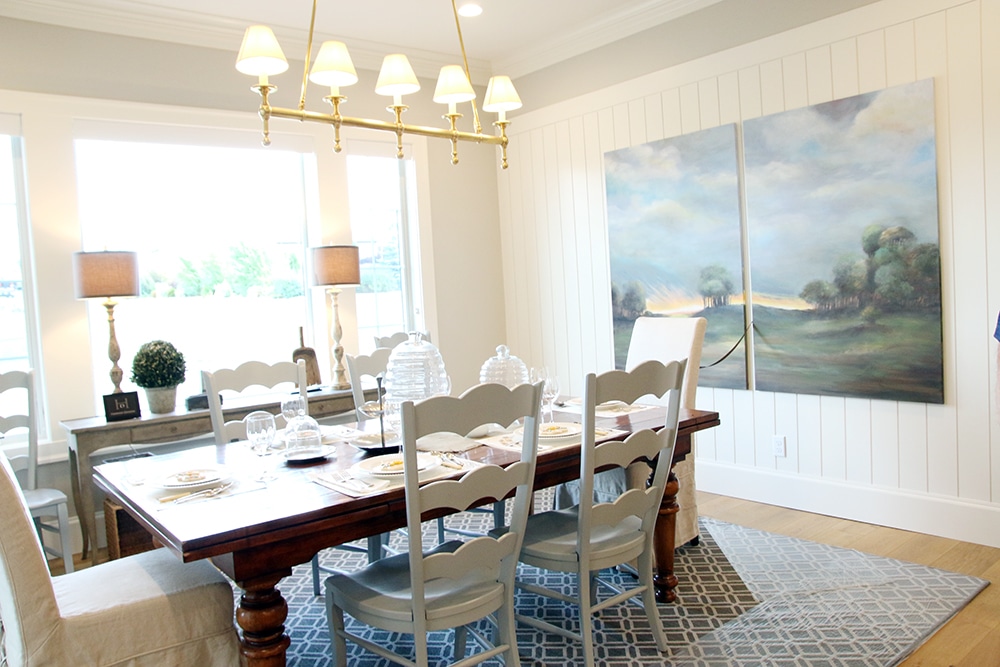 Idea to steal: Crisp vertical paneling is a fresh alternative to shiplap. 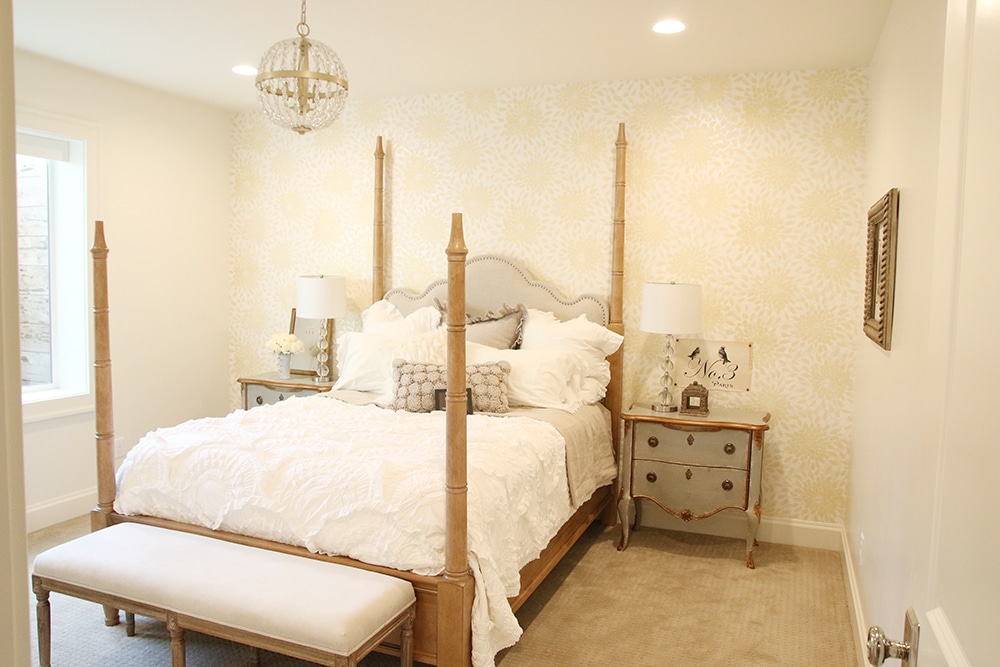 Like most homes in our area, including ours, all the bedrooms (besides the Master) are downstairs. This home had three adorable girls’ rooms and one boy’s. My favorite of the girls was the one above. I usually would rather see a whole room wallpapered if it’s small, but in this case, the accent wall works beautifully because the adjacent paint color feels warm and complimentary. 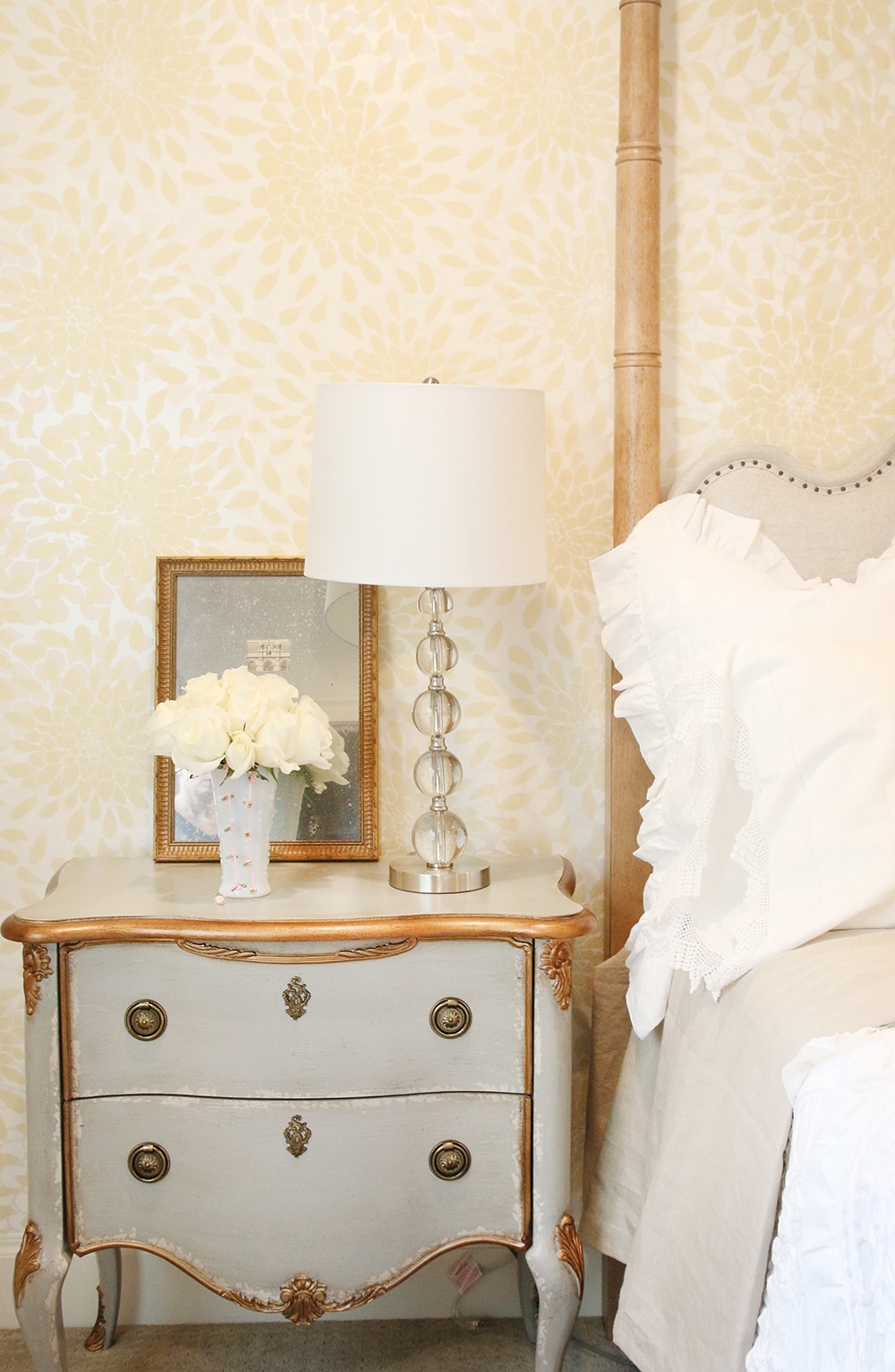 The bedroom above had this attached bathroom. The marble subway tile surrounded the walls of the toilet/shower part of the room, but a soft blue paint warmed everything up on the vanity side. But perhaps my favorite part was the white penny tile floor. It looked expensive, but playful.

Idea to steal: Save money by using penny tile on the floor mixed with higher-end tile on the walls. 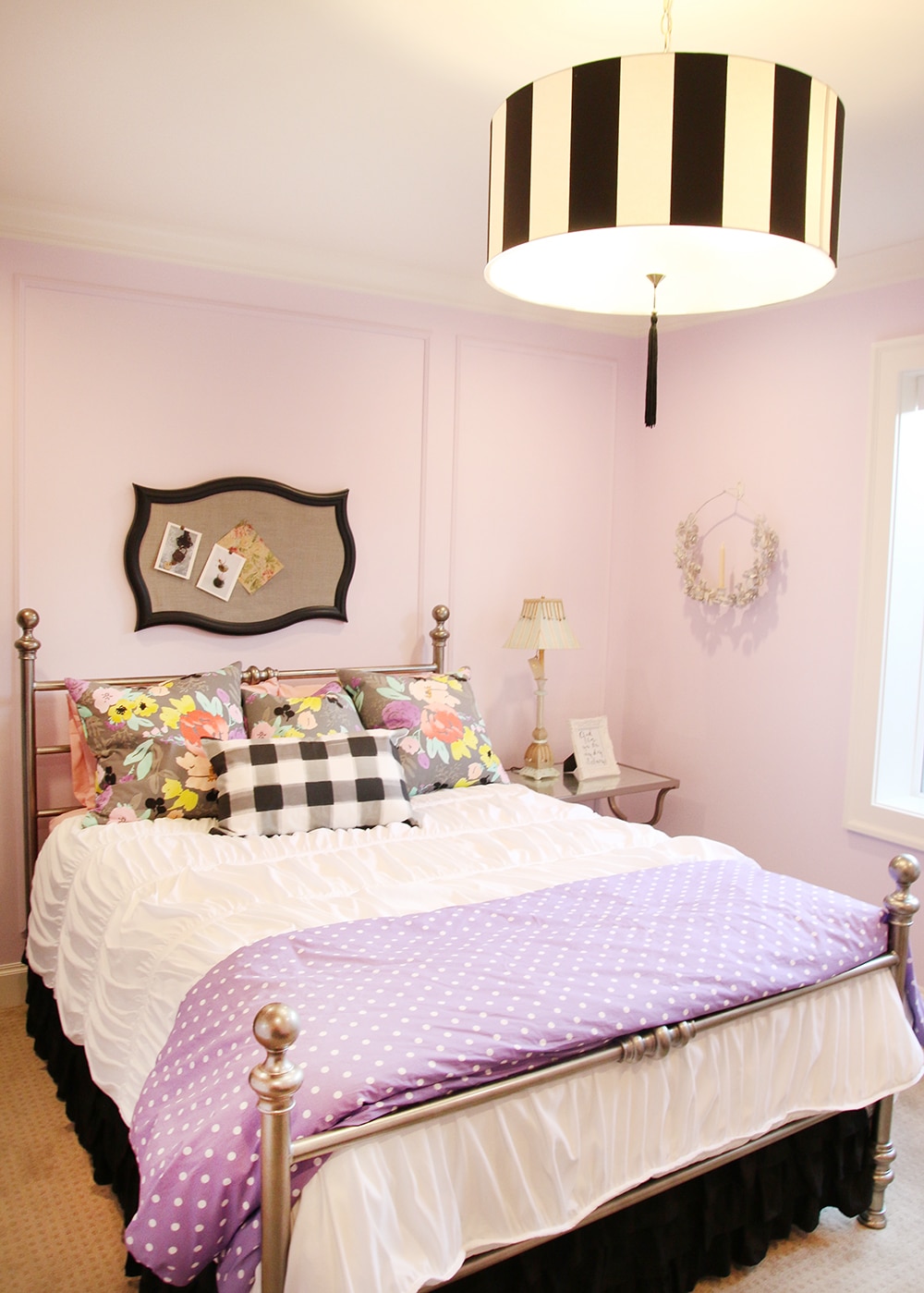 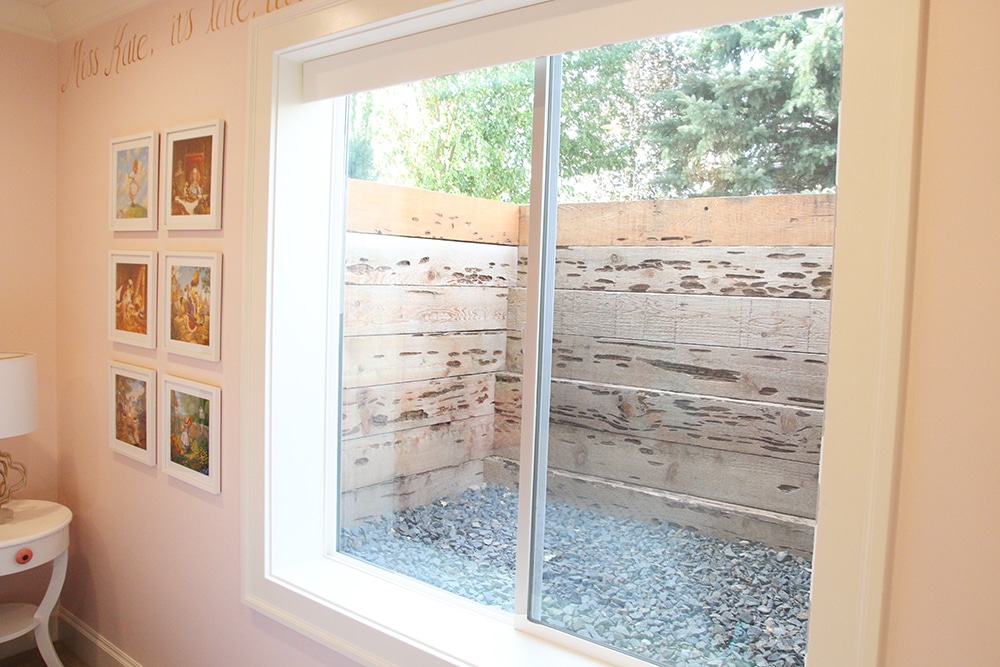 I’m always curious to see how other homes address their window wells, since it’s something that’s so visible from the rooms in our basement, and I can’t get over these wood lined ones! I think they’re planed railroad ties? I showed Chris this photo when I got home and he loved it too, and then said, “That’s a big job.” But it’s definitely on my list. 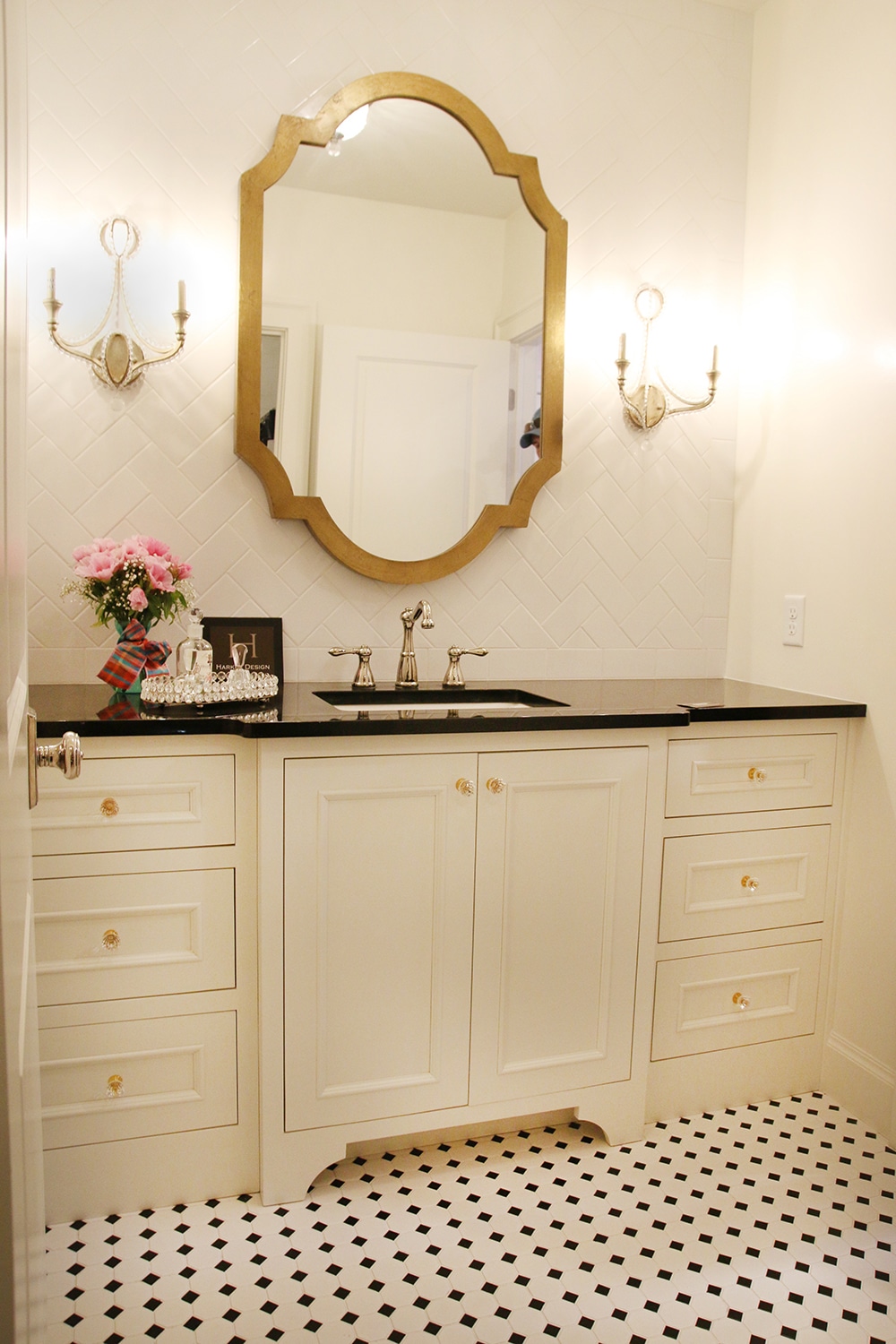 In between two more girls’ rooms there was a Jill and Jill bathroom with identical vanity and sink areas (the tile choices in here couldn’t be more perfect, right?) And just when I thought I was over black and white striped rooms, the shared shower/toilet space in between nailed the look.

The last photos I snapped from this house were both art related. I loved these teeny vintage photos with a large white mat and gold framed. It really enticed everyone to come see what it was all about. Kim did something similar in her studio years ago. 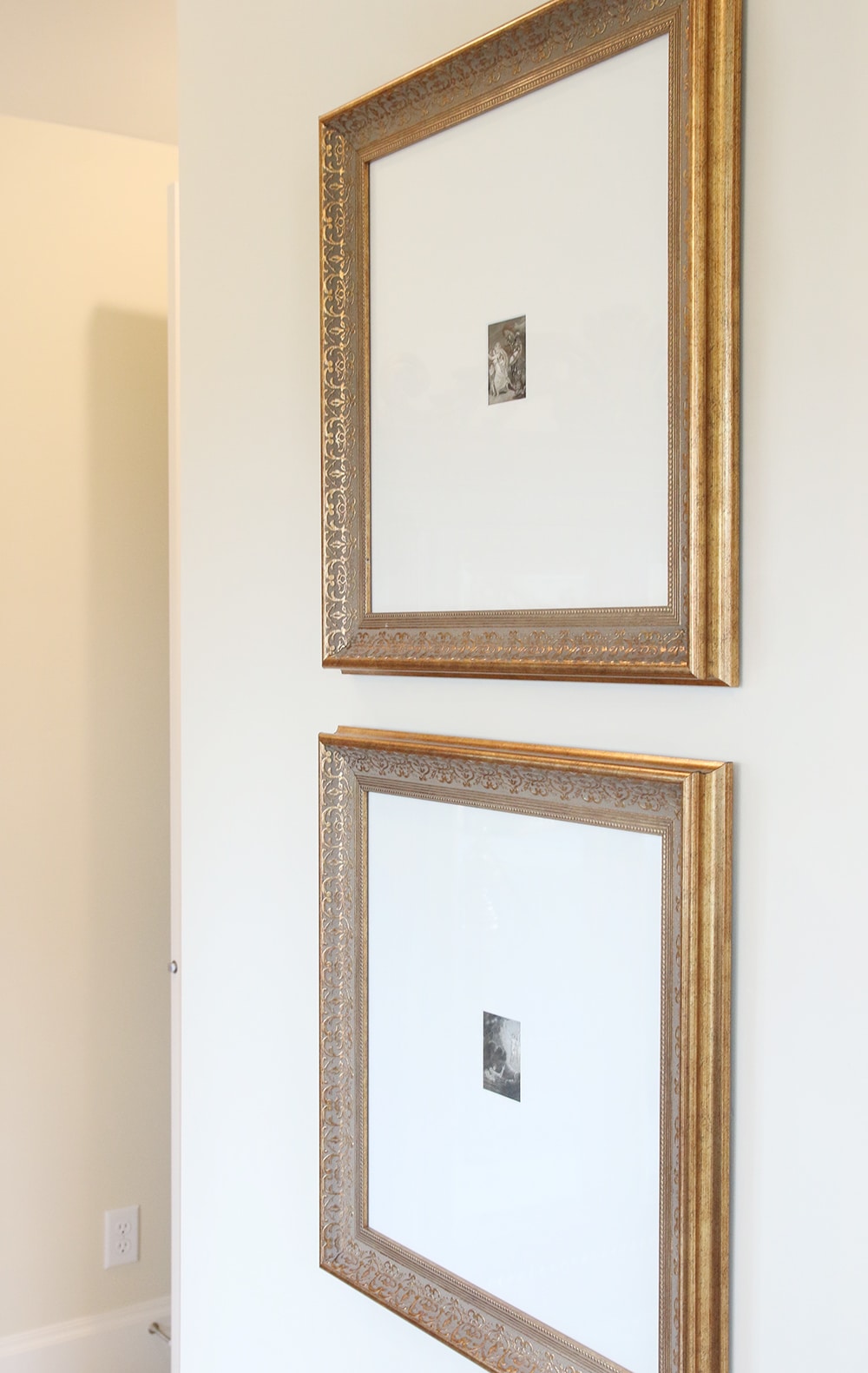 There was also a large map of Paris that spanned almost an entire wall in the basement and as I looked closer, I noticed it was comprised of many pieces pinned into the wall to make it look like one large piece of art on the cheap. 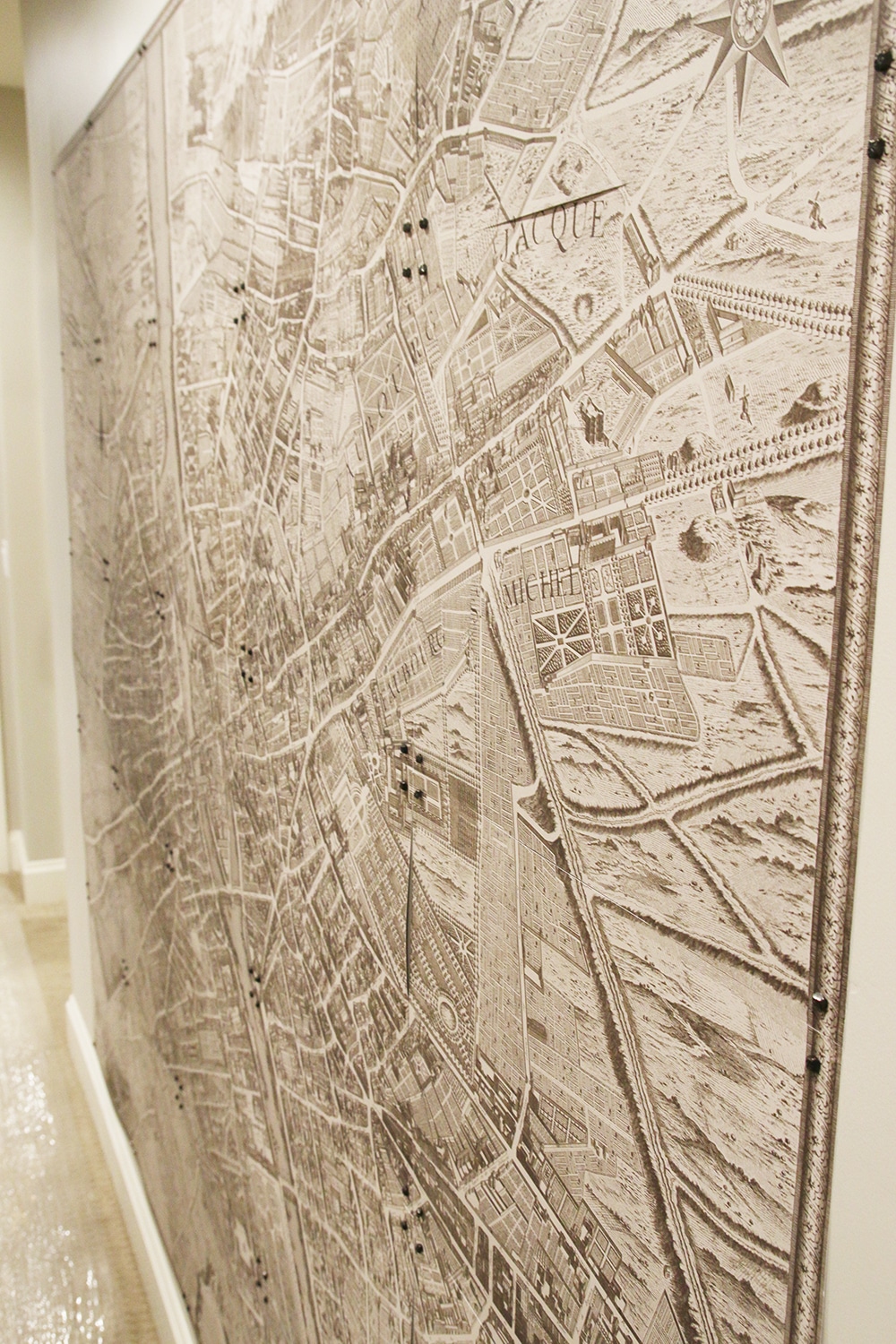 The next house we went to was absolutely insane. Like, fell-down-the-rabbit-hole-in-Alice-in-Wonderland insane. It was massive, and definitely had a shabby-chic/industrial/rustic farmhouse vibe, with lots of explosions of color, but I only walked away with a few photos that I thought I could pull inspiration from. 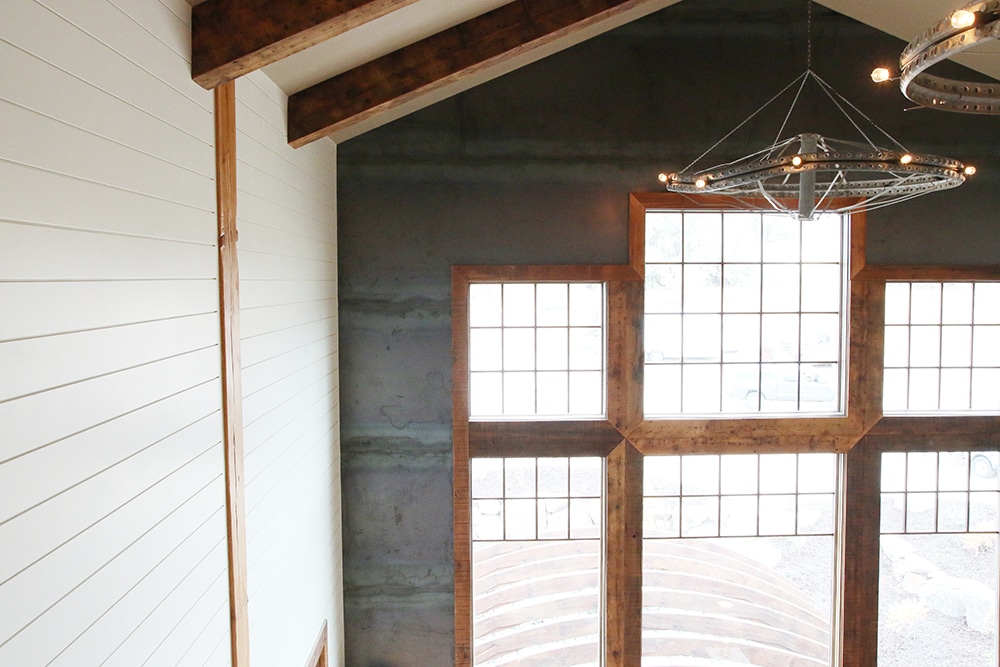 Idea to steal: Metal sheeting on the wall.

The walls in the great room were 2 parts white planked, 1 part brick and 1 part…metal! The metal was surprisingly warm and beautiful. And yes, those are large sprinkler wheels turned chandeliers. 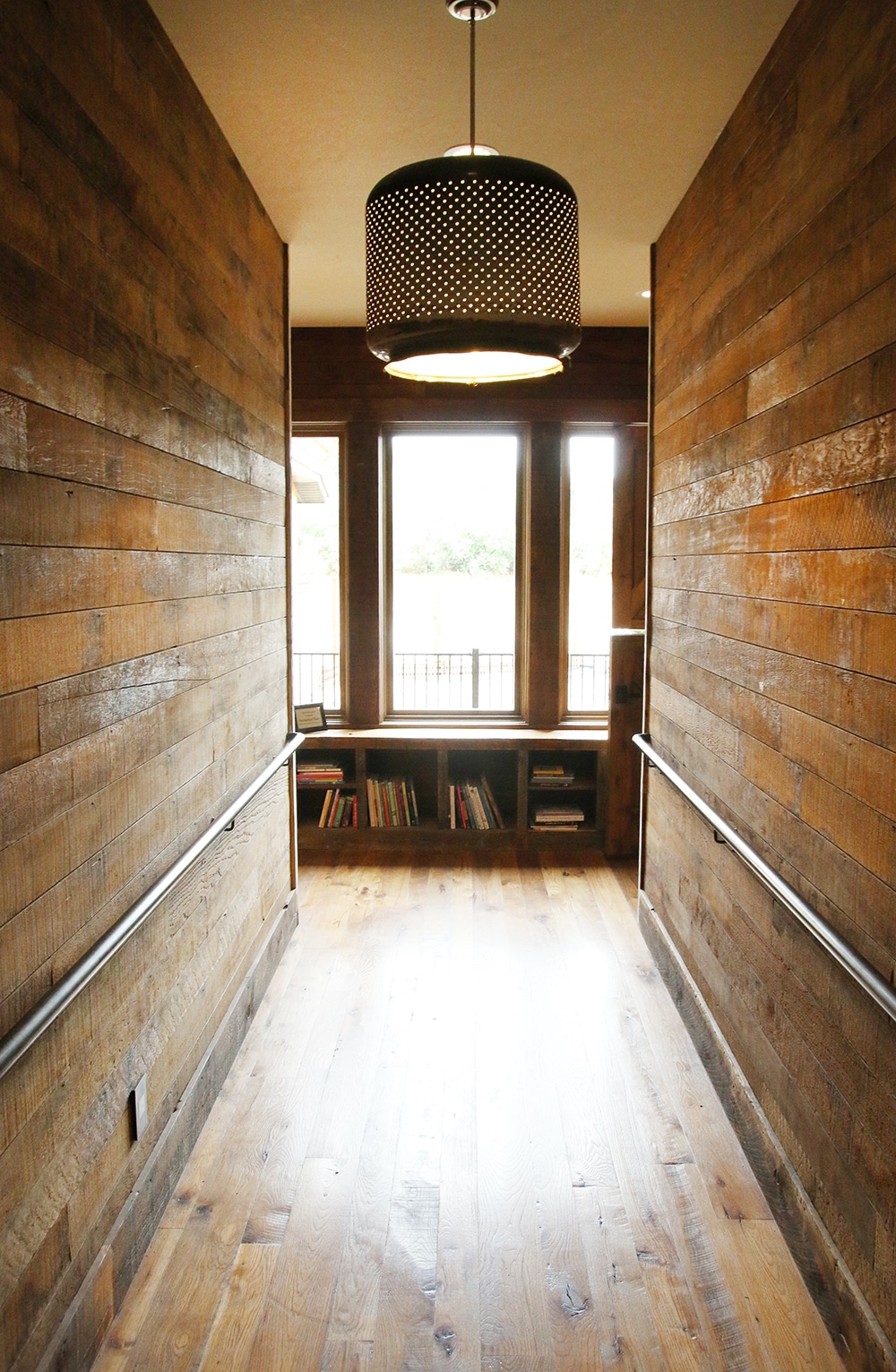 My friend and I actually kept getting lost in this house. There were so many corridors and hallways, but I didn’t mind losing my way in this one above. Any hallway that leads to a window seat stocked with books is a good thing.

I believe there were 3 staircases in this home, but the main one was covered completely with old, distressed doors. I really wanted them to open with scary surprises behind them–but no dice.

There was a boy’s room upstairs that was completely covered in corrugated metal sheeting. 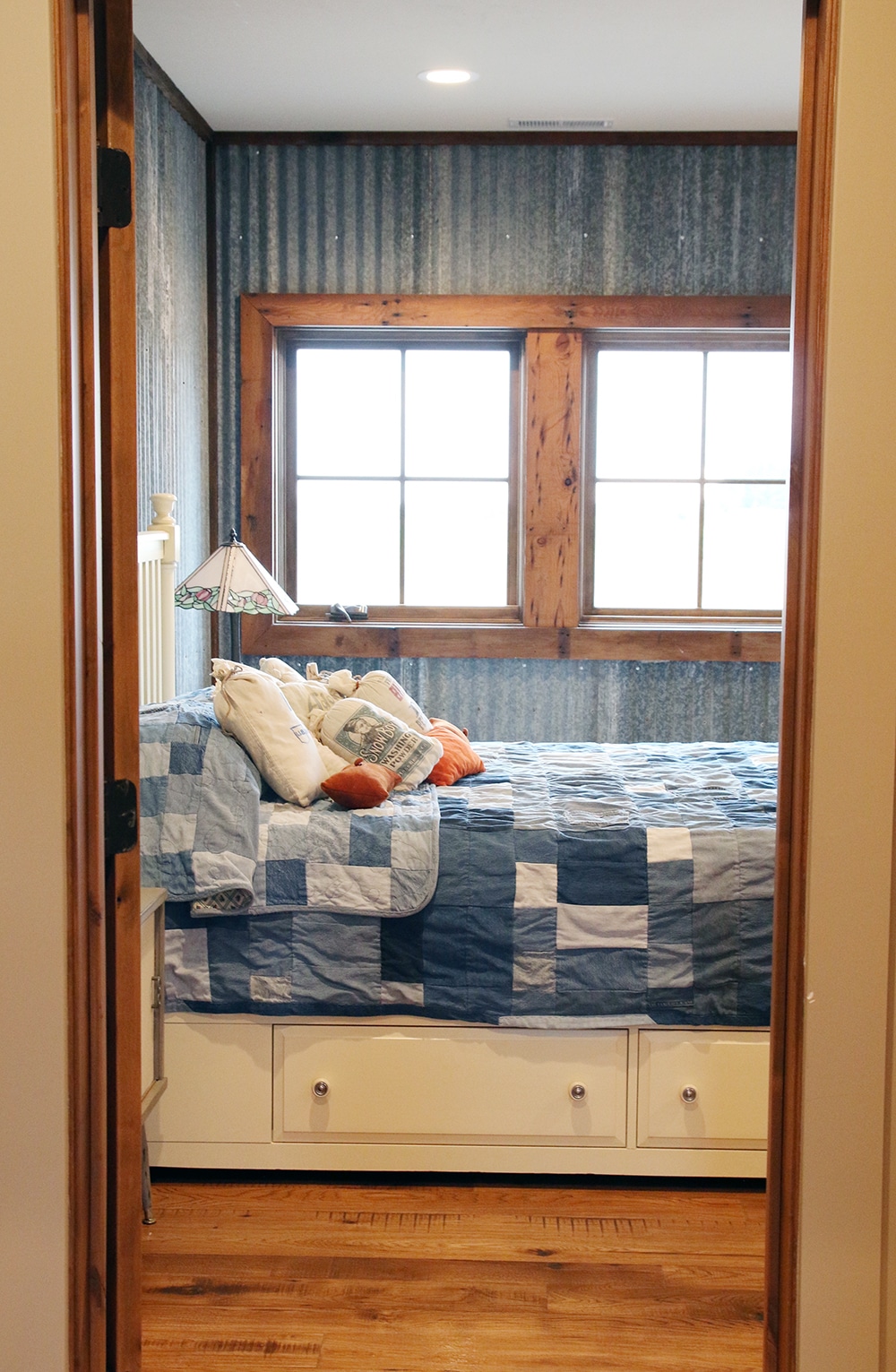 And a sweet bathroom with softly painted planked ceilings. 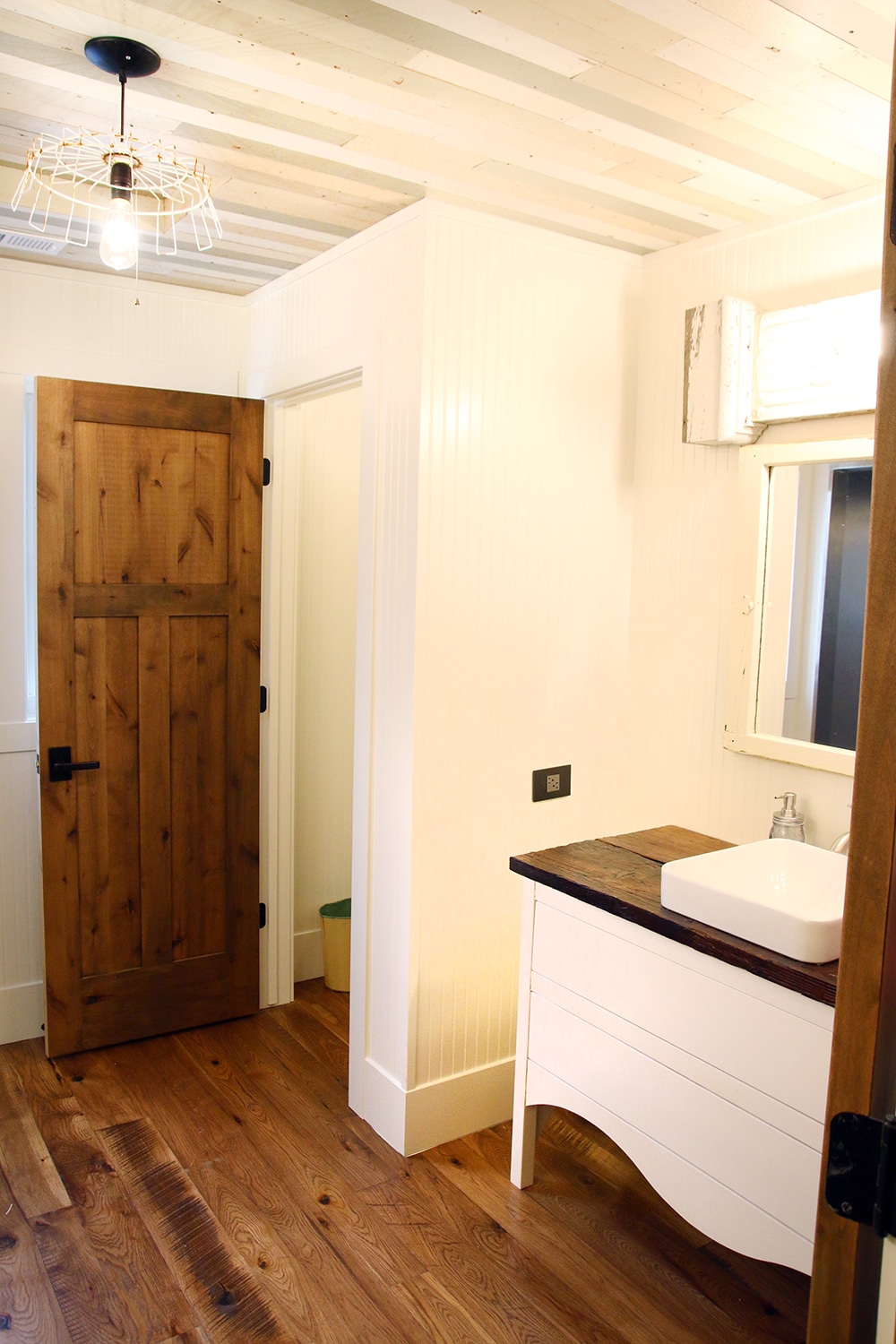 The last house I wanted to share had really pretty exterior details. 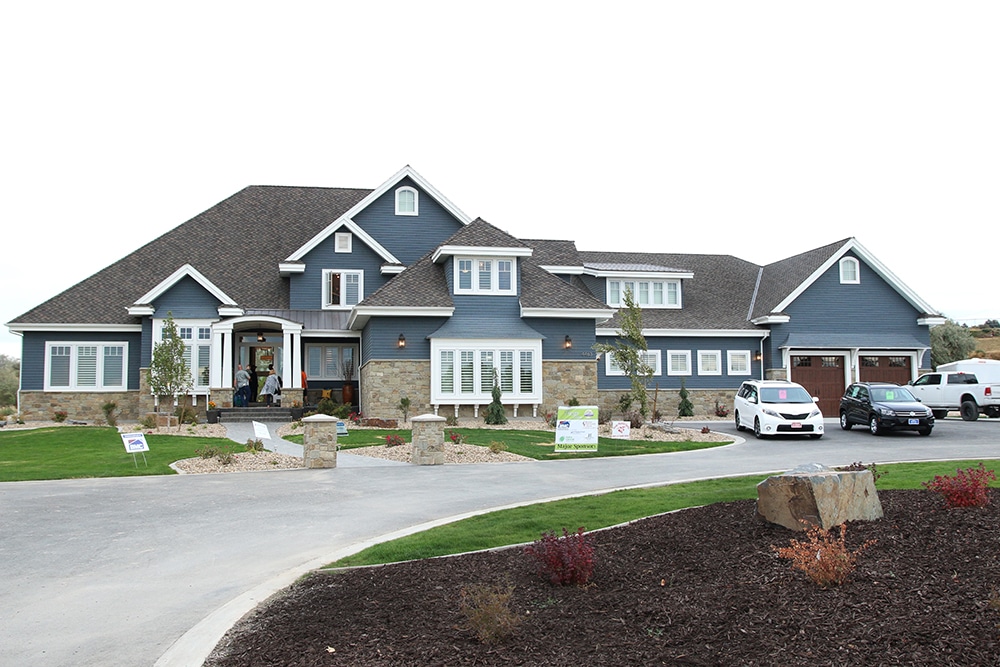 From the siding to the look-a-like shaker roof and the metal roof accents, a lot of thought went into the exterior. But the only picture I ended up taking inside was this accented stairwell wall. It did have a full sized basketball court inside. 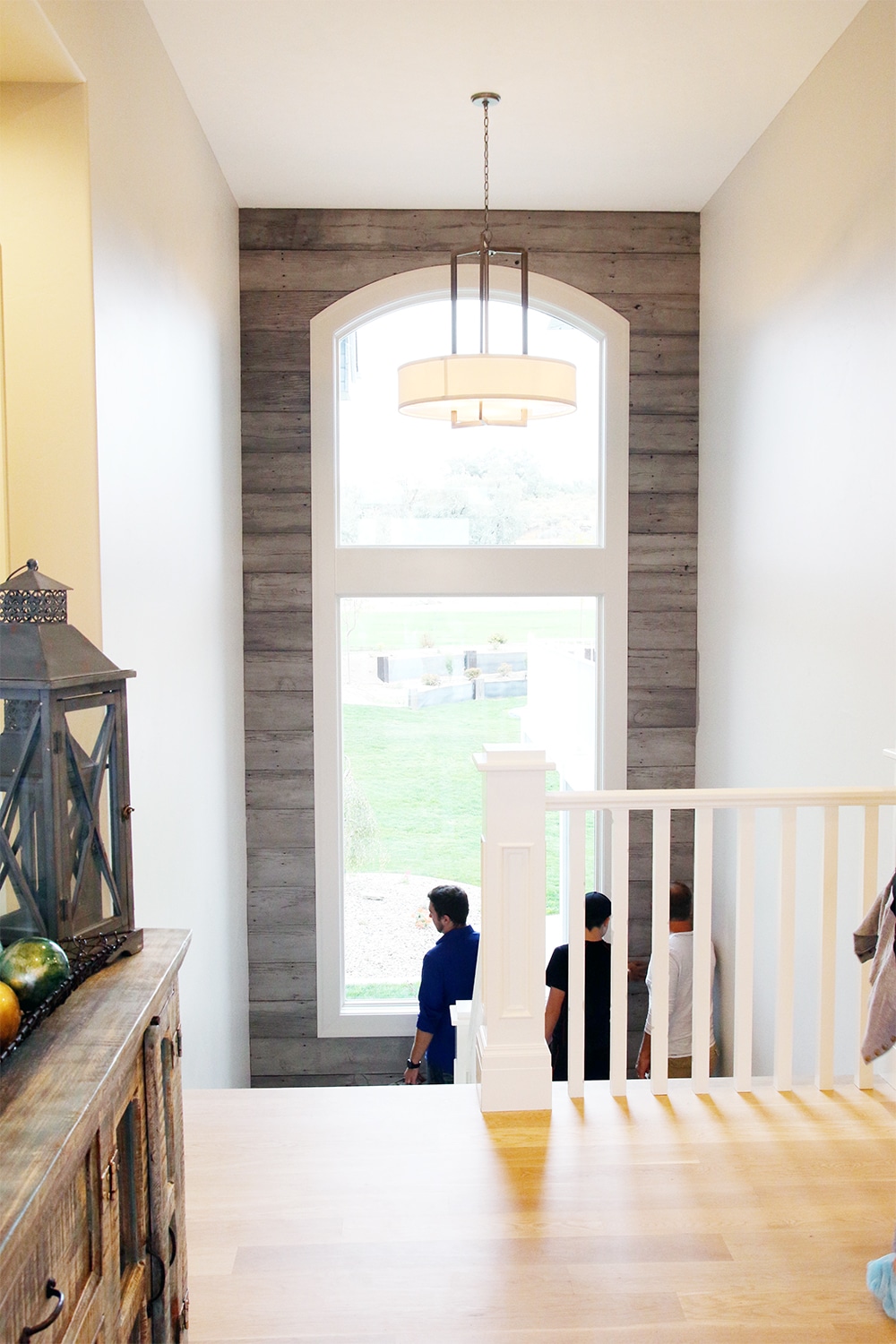 This house also had a full basketball court inside. It was pretty crazy. I wished the parade included different kinds of homes and styles and some smaller houses would be nice. (I think the smallest home we saw was 4000 sq ft!). But while I wasn’t overly impressed with the interior design, I did come away overall feeling inspired and there were little or big ideas I took away from almost everything we saw–I’m ready to tackle some bathrooms for sure! What was your favorite part? 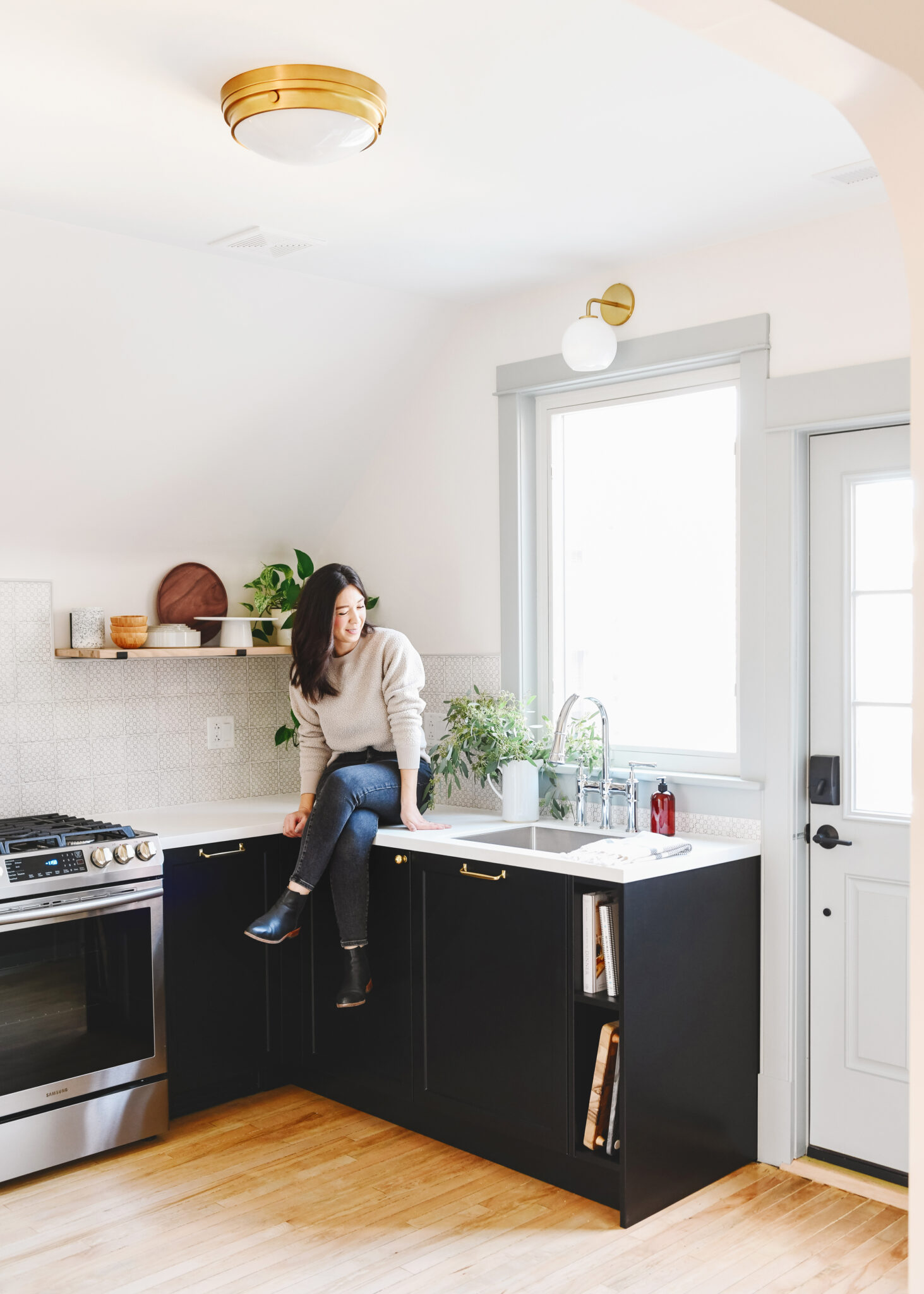