Despite its significant flavor and long history of health benefits, coriander is frequently overlooked come meal time. But that’s not coriander’s fault – it’s ours! Even though coriander isn’t much of a “leading lady,” it plays the supporting role so well that, with a little background, you’ll be emptying your jar of coriander gathering dust on your spice rack in no time.

To be clear, I’m talking about coriander seeds, not the leaves. The leaves are what we call cilantro, which everyone is familiar with. But it’s important to note that coriander seeds and cilantro have very different flavors and, though often used together, are not interchangeable. Coriander seeds have a sweet and spicy flavor, like a mixture between sage and lemon peel, and are often used in southeast Asian cuisine, including Indian and Thai dishes. Coriander and cumin seeds are toasted, ground and added to almost all curries – so if you’ve ever eaten a curry and wondered what that flavor was that you loved so much but couldn’t recognize, now you know.

As with any spice, you simply need to know what coriander plays nicely with in order to start using it, so here are a few tips. Middle eastern, Latin American and Asian flavors are safe. One thing that all of these cuisines have in common is the use of cumin. The other flavors you add will determine the country your taste buds visit come dinner time. Paprika, chili powders and oregano will taste more Latin American, while turmeric and garam masala will taste Indian. Here’s what I did with it:

Please note that this isn’t a traditional Indian dish. Though pitas can be found in parts of India, something like this would be more likely eaten with naan bread. That being said, it was still delicious.

Here’s what you do. Pour the coconut milk on the shrimp and add all of the spices. Mix that around good and let it marinate for a few minutes. Maybe 10-20 min. Pour the contents of your bowl, shrimp, marinade and all, into a heated non-stick pan and cook until the shrimp is just done. Remove from heat. Cut your pitas in half, open them up and layer like so:

But the flavor is far from boring. If you feel more comfortable eating something that looks less anemic, you can chop the cilantro up a bit more and put it on top, but that’s your choice. Just so you know it’s there… 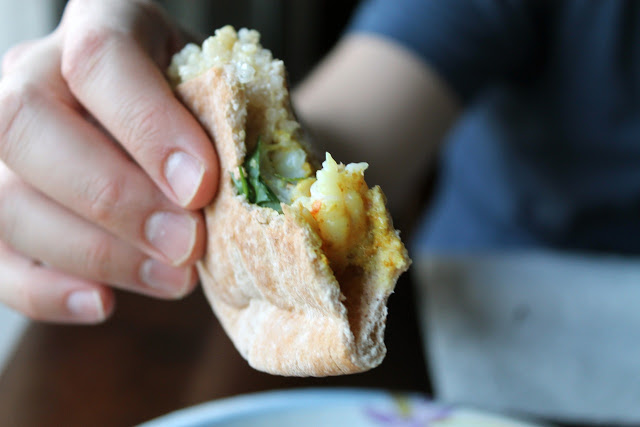 So don’t be scared. Start practicing with your coriander and make something new. What have you used your coriander for lately? Or maybe there’s a coriander-incorporating recipe you’re jazzed about but haven’t had the chance to make yet.

Feel free to ask any questions Google hasn’t answered for you yet. I’m sure I have a book somewhere I can find the answer in. :)
Peace out, internet friends.

Our Walnut Countertops–Sanded, Sealed and Finished! »

« Healthy, No-Dish Meals that Have got Us Through A Week with No Kitchen