This Master Bathroom project is a doozy! The beauty of DIY is, in many cases, you can figure things out as you go. You do the work when you have the time, or you order the materials as you get the money, or you take it step-by-step and eventually see it all come together. This project, is not like that. And nowhere is that more true than with the plumbing.

If a bathroom renovation could be visualized as a giant circle of people holding hands, then every other person would be some kind of plumbing fixture or drain. If one person moves, the people holding hands with them move. So, any change to the plumbing, no matter how small, impacts some other part of the project. And any change to other parts of the project, changes the plumbing. For this bathroom we’re using all Kohler products and have been making a lot of on-the-spot decisions this week, more things that I’ve never even thought about and yet, suddenly absolutely had an opinion on. Here are a few decisions we’ve had to make, (and some things for you to think about in your own future, or current bathroom projects).

Ideally, you want the toilet in that one spot. But, as it turns out, there’s a floor joist there. Or a recessed light fixture from downstairs. Or heating vents. The locations where we wanted our toilet (that we even bought a very slim toilet tank for) fell right on a floor joist, so we had to move the toilet out a few inches. In order to keep enough space in front of the toilet, we also needed to push the shower wall out (the toilet closet and shower share a wall – you can see the toilet drain behind the wall in the photo below). 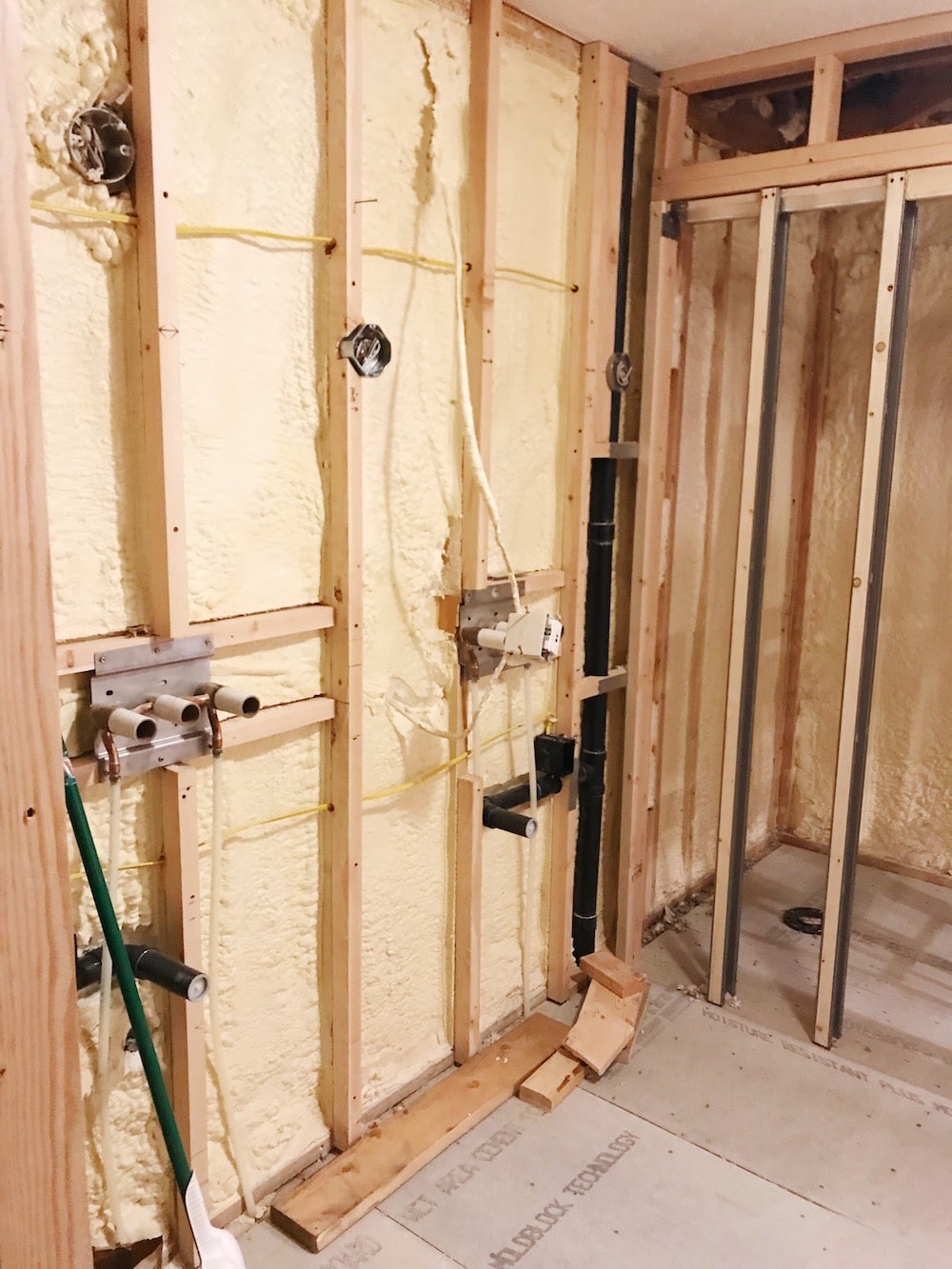 But the shower was already borderline too small, so we also pushed the other wall into the bedroom a few inches. That wall was coming down anyway to put in a pocket door, so the only additional work was cutting some tile. We went forward with it to make our final shower size 48×60. 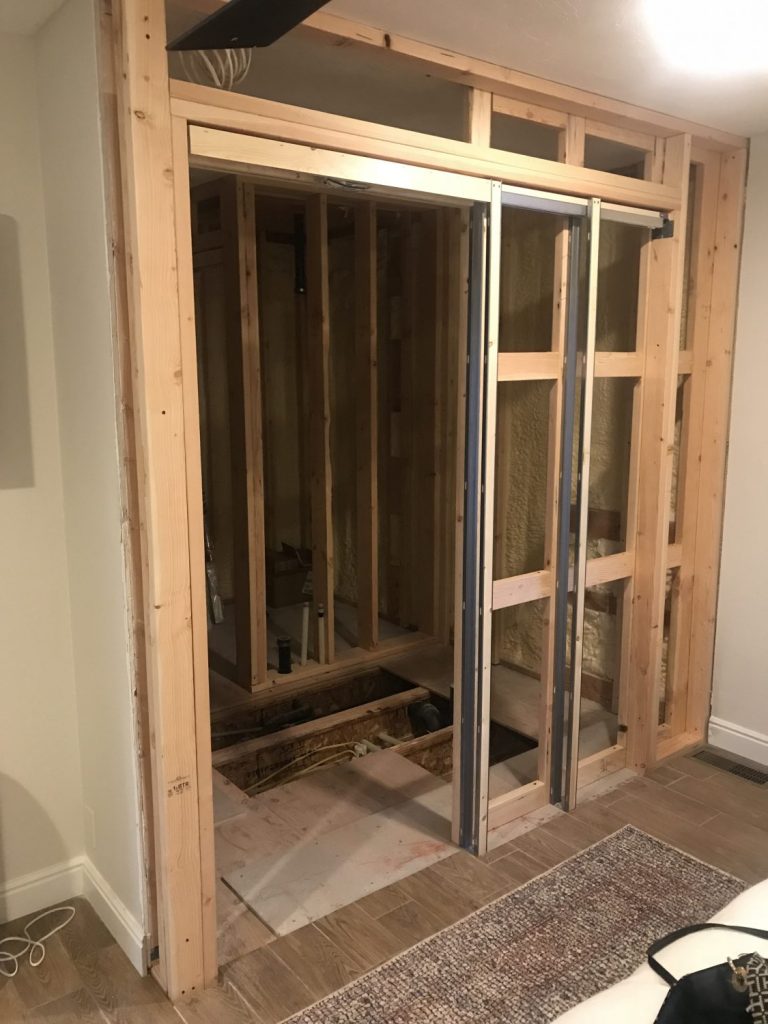 Choosing a shower may seem straight forward, but a lot of homeowners spend less time thinking about how they want their shower controlled. Inside the wall is where you put your shower valves, and different valves do different things, and what you choose depends on how you want your shower to function. We actually completely misunderstood what we wanted and what we ordered and had to have some extra valves overnighted.

We went with two shower heads coming from opposite walls, and a rain head coming from the ceiling. We want to control the temperature of each independently (Jules has lizard skin or something – she’s apparently impervious to scalding heat), as well as being able to control the flow of the water. So we chose to run separate lines for each head, and give them each a Kohler thermostatic valve for temperature control and a Kohler volume valve for flow control, and to turn it on or off. 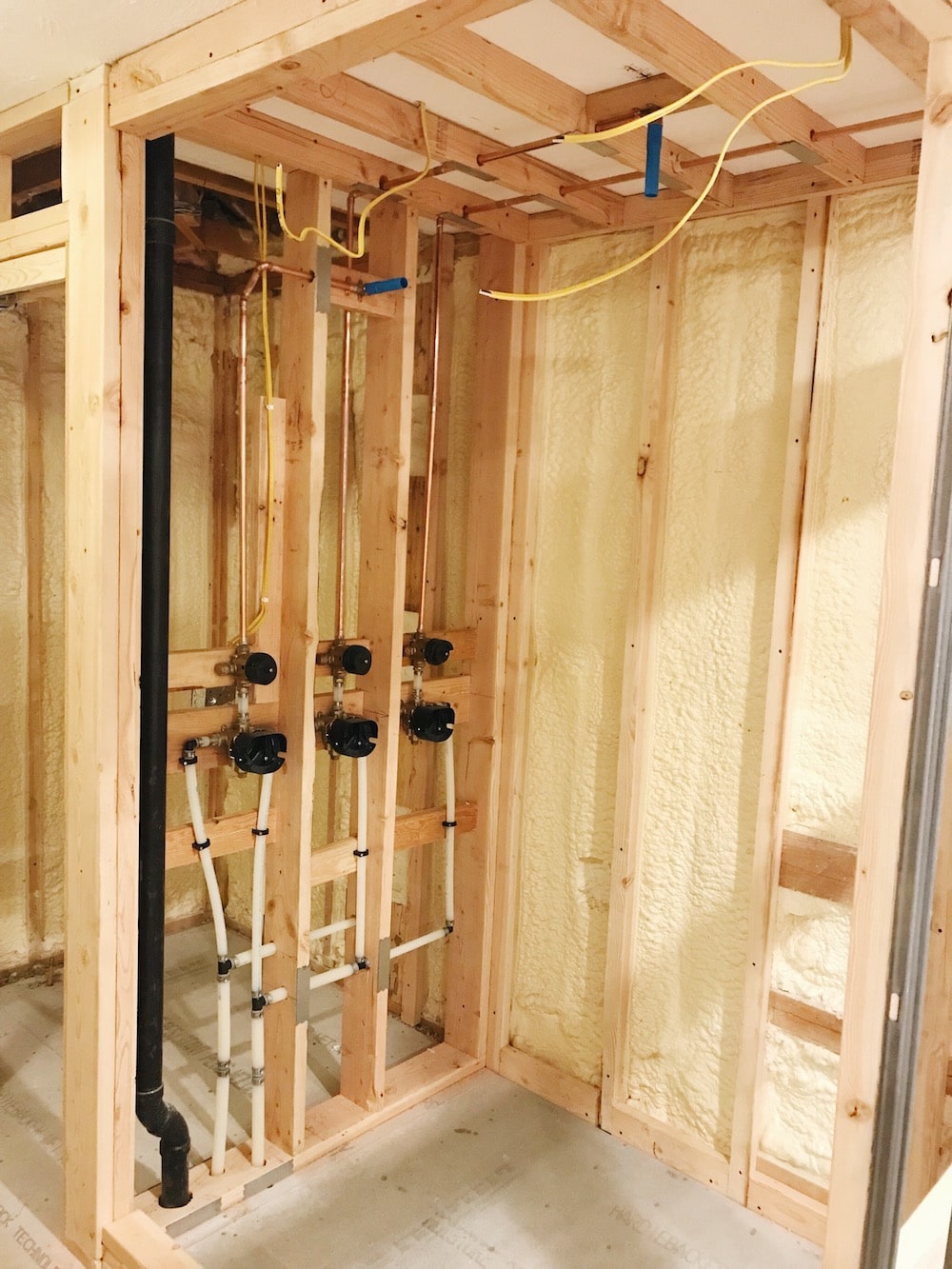 If you’re unfamiliar with  the roles each valve plays, essentially the thermostatic valve only controls the temperature. You set it where you want and you leave it that way. The volume valve is what turns the water on and off, and the more you open it the more water flow you get. The great thing about this setup is, Jules and I can each set a shower head to our preferred temperature, and all you have to do each time you shower is turn on the volume valve. It will always be a consistent temperature, each time you jump in the shower. 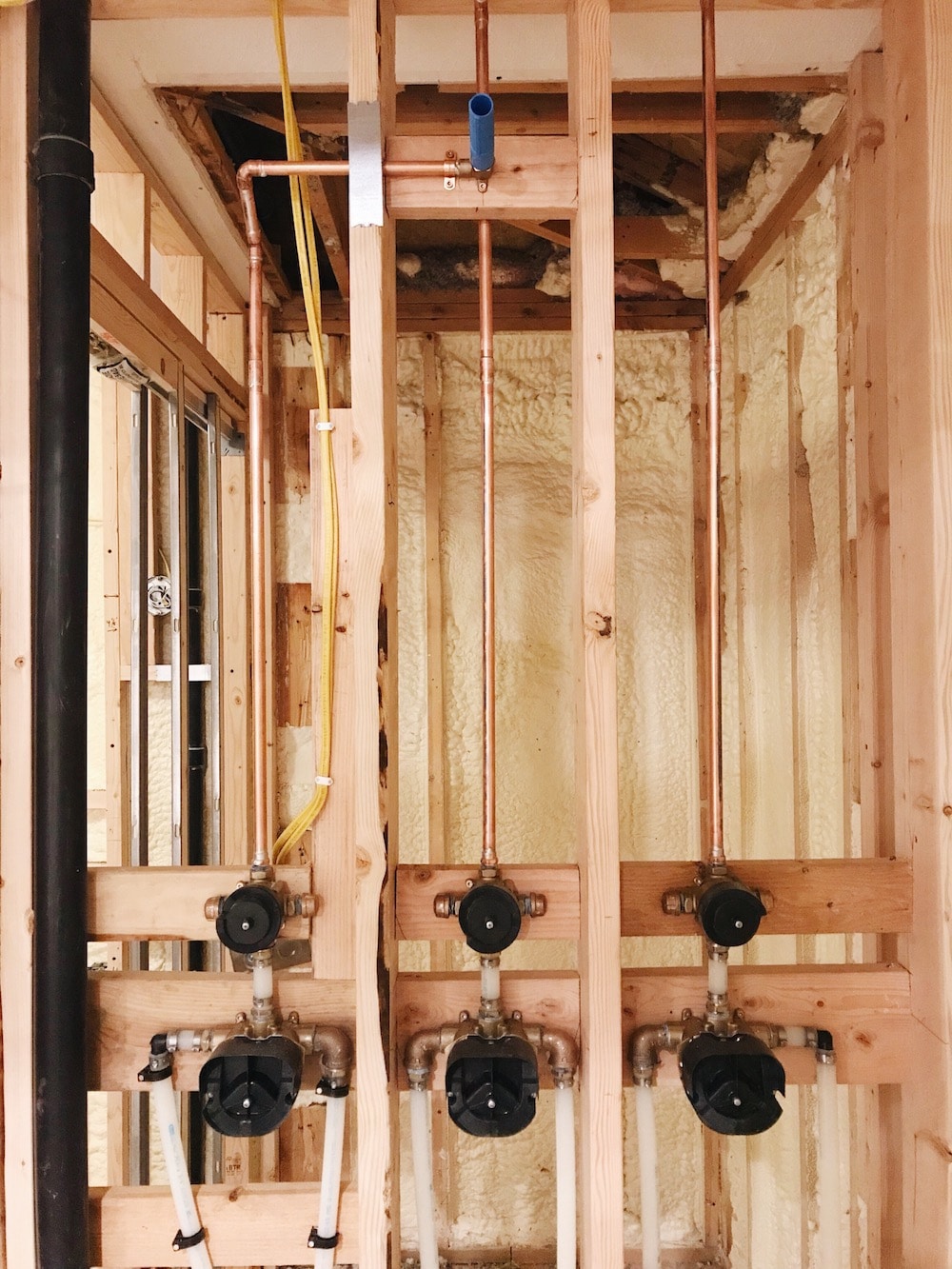 We decided to have a different volume (small knob) and thermostatic (large knob) valve for each head.

For the sink, it can actually be a bit tricky to track down the correct valve to use for a wall mount faucet. Valves for countertop mount faucets are included with the fixture, and you don’t have to worry about it. But wall mount faucets require a special valve – here is the wall-mount valve we used for our Kohler faucets. 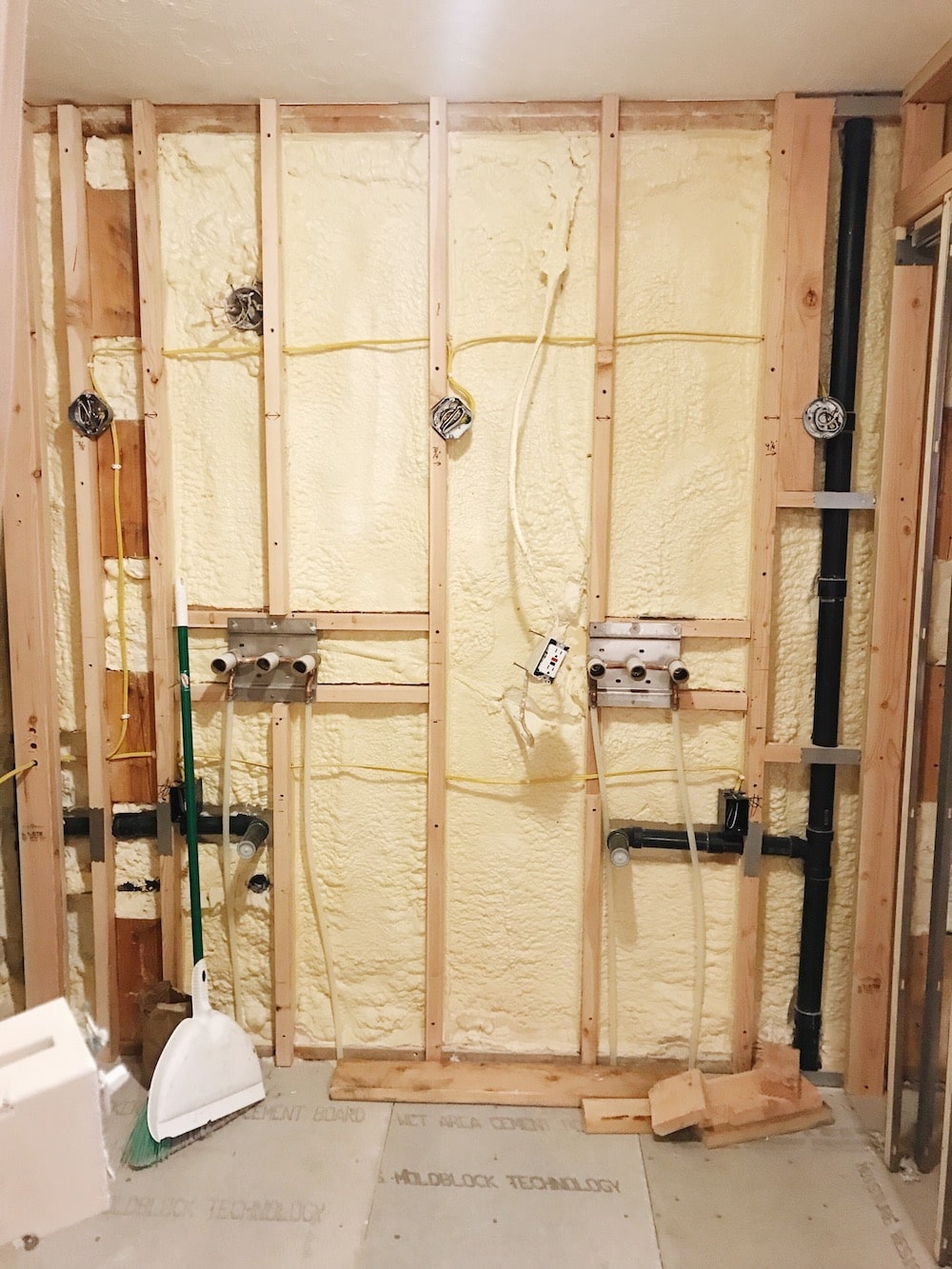 So you managed to get them all in your house, but now to choose where to put everything? How high up we want the shower handles; how far apart they should be from each other; how high to put the shower heads; how high above the sinks we want the faucets. For some decisions, we rested on the norms from the professionals, or at least wanted to know the norms. Our contractor said he usually puts the control valve up 44in from the floor, so we put the bottom valve at 40in and the top at 48in.

We also decided to put all 6 valves on the same wall, which will be right inside the door. This way you can just reach in and turn whichever shower head on. It’s also a bit easier than trying to stuff plumbing into a wall with a pocket door.

Our sink valves are 6″ above our countertop. 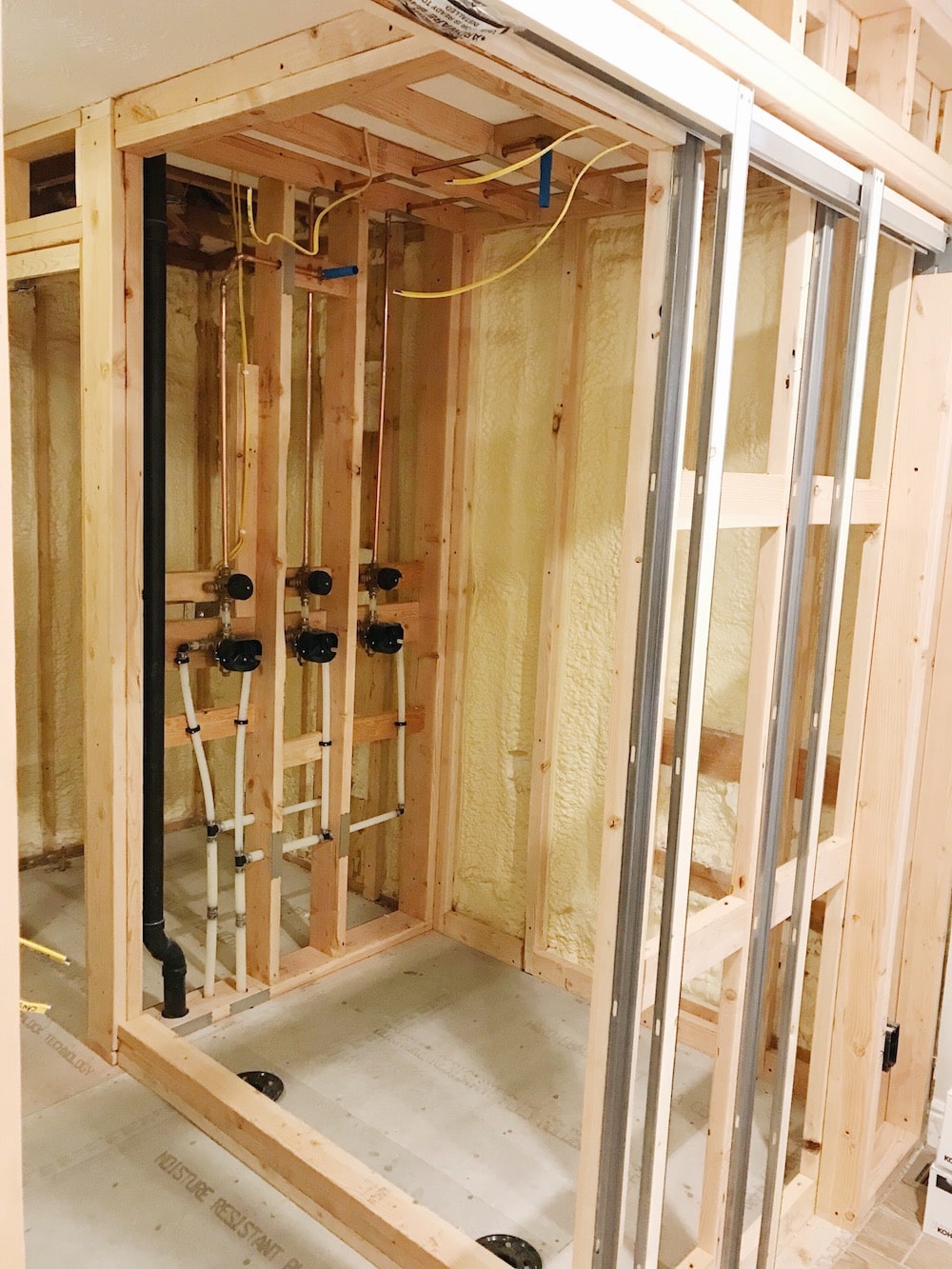 Water waste has been a bit of a concern for Jules and myself. We don’t live in a particularly dry climate, but nobody likes to just run water for long amounts of time. The problem with our bathroom is it’s across the house from our utility room, and I swear the water lines wrap themselves around the house 5 times before making their way to our bathroom, because it can sometimes take a couple minutes after turning on the shower before it heats up.

For this reason, we decided to spend a little more and have our plumber install a recirculating pump to our bathroom line. What the recirculating pump does is, it cycles hot water back and forth between the water heater and the bathroom fixtures so that, when they’re turned on, the water is immediately hot. Combine that with our valve setup outlined above, we have perfect temperature the moment we turn the shower on.

Now, there’s a little debate about how much good recirculating pumps actually do. Since you use electricity in the act of saving water, some people think it’s a bit of a wash (pun!). But the pump we’re having installed is a smart pump (this is the one we’re using), which learns our usage behaviors and adjusts accordingly. So it will pick up on the times we’re most likely to shower (Jules gets home from the gym every morning around 7:30 and hops in the shower), or do the dishes (morning and evening), or do laundry, and it will turn itself on and off to accommodate. It uses as much energy as a 25 watt bulb and saves over 16,000 gallons of water per year per household–worth the expense.

This one was a little tricky. You’ll remember last week we left off with a picture of a pipe sticking through the ceiling in the girls’ room. That was not gonna fly, so we spent the next morning searching for a solution. 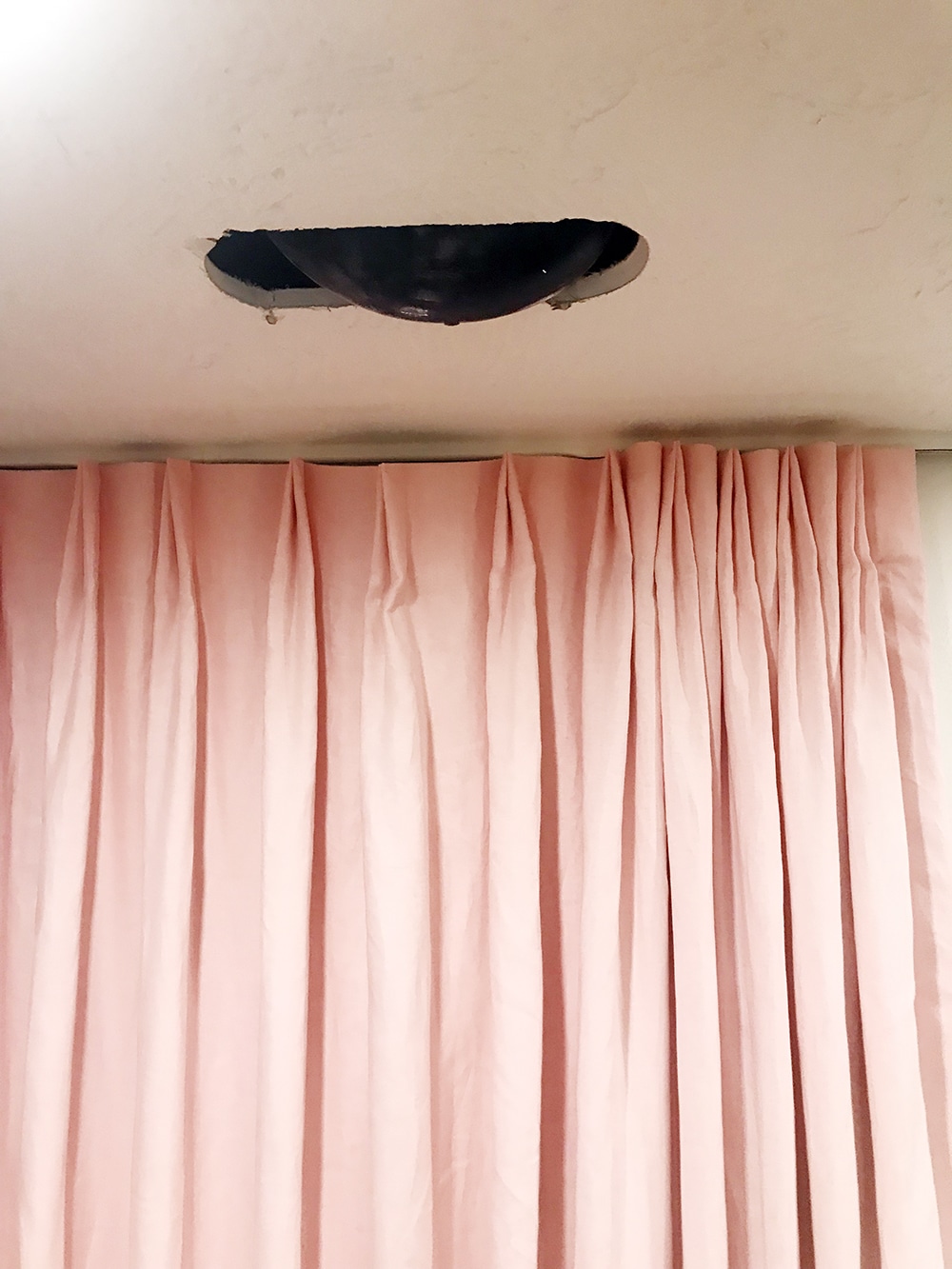 To back track, the problem was the amount of water drainage from our shower and our plumber wanting a 3in drain as opposed to a 2in (standard in most showers). The reason for that is the potential water flow through our three shower heads. They ran a new water line directly from our water heater to our bathroom to provide ample water pressure if we decided to have all 3 shower heads blasting at once. Most often there will be one shower head running, and at a moderate flow, and a 2in drain would be just fine. But to cover their bases, they all felt better about a 3in drain in the shower.

The other option was to have two, 2in drains in the shower, but when it comes time to pour the shower pan you have to deal with weird angles and the tile we’re using wouldn’t sit right. So we looked into linear drains, and actually found a company called Quality Bath (meh on the name, super jazzed about their customer service) that makes a linear drain that is customizable for different installations. Meaning, you can add an extra drain and the drain holes can be moved to wherever you need them! 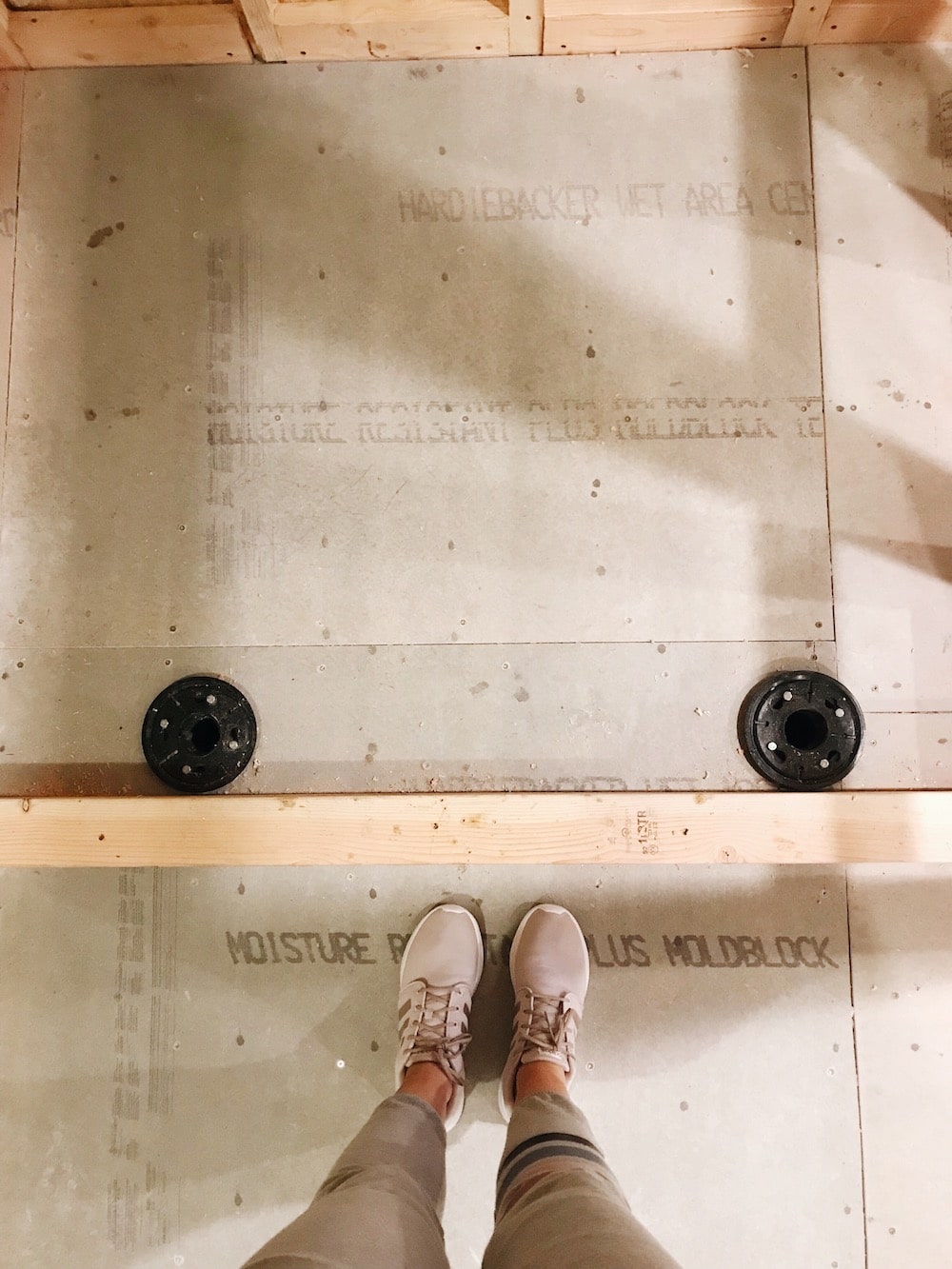 We ordered the drain and paid for expedited shipping to get it here ASAP. We decided to put the drain just inside the shower threshold so it’s mostly out of site, and that will allow the shower pan to be straight from wall to wall, angling slightly downward toward the drain. We’re so happy with this solution and can’t wait to see how it looks.

This week was heavy in decisions, but so much progress. The electrical gets finished tomorrow, the shower pan will be poured in the next couple days, and we’ve heard rumors of sheetrock by end of week. Most of the surprises are out of the way (knock on wood) and we’re just so excited to watch everything come back together over the next few weeks.

Check out Week 1 progress here.
And the Bathroom Mood Board here!

New Abstract Art In the Bedroom » 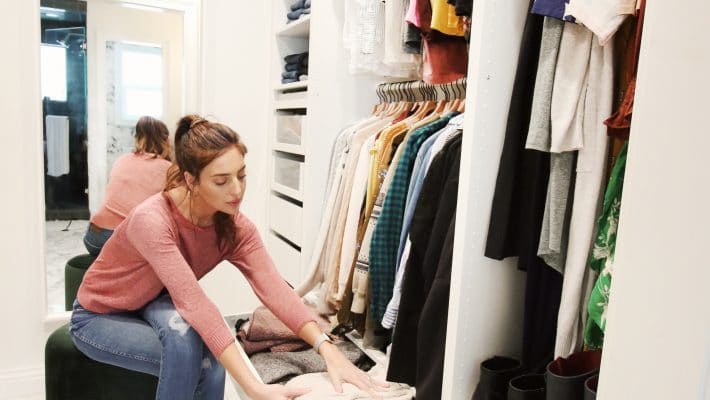 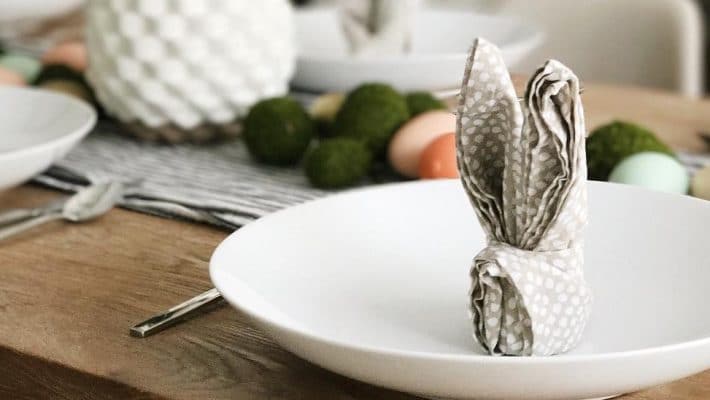 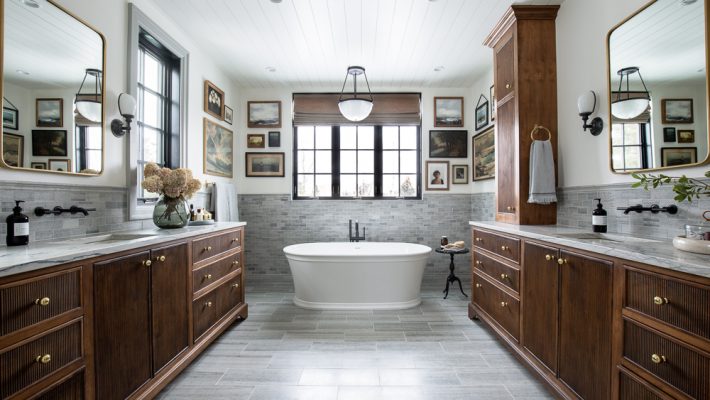