About 3 years ago I was in training at a previous job, making $11.50/hr. We had a new baby, lived in a new town, and were what could only be described as “dirt poor.” We often look back and stand in awe at the self-control we had with our budget, and also all the great deals we found. For example, there was one time we went grocery shopping and were looking for some cheap meat. There were a bunch of packages of chicken wings and thighs on sale (the BIG packages). The thighs were $2.89 and the wings for $6.89. The wings were too expensive for us, so we started loading up on chicken thighs. Then, we realized that whoever marked the prices down, had accidentally put the $2.89 price on 4 of the large packages of wings. We snatched those babies up and celebrated our haul.

Why do I share that story? Because it was on my mind. Other than that, it’s not terribly relevant. Moving on.

I love chicken wings, and I’ve tried making them just about every way you can think. I’ve steamed them, poached them, fried, stewed, grilled, and baked them. Steaming, poaching and stewing were for specific dishes, and the skin was removed because cooking chicken skin in liquid makes it gross to eat. The classic buffalo wing is deep fried and coated with a mix of hot sauce and butter. While I do enjoy a good buffalo wing, I’m not a fan of deep frying at home (too much mess to clean up, and usually you can make food just as good or better utilizing other cooking techniques). For the wing, in my opinion, grilling or baking is the way to go.

So chicken wings are a meat, not a dish. This means you can literally make thousands of versions of the chicken wing, and I’m sure I’ll highlight at least 200 versions over the life of this blog (did I mention I love chicken wings?). This post is dedicated to my go-to recipe. When we make wings in our house, 95 times out of 100 we make them this way. While there are lots of great recipes, we always come back to this because it’s just unbeatable. This version is baked. Here’s what you need:

Can you use a barbecue sauce other than mine? Sure. Will it taste the same? Of course not. So if you make these wings and opt for another barbecue sauce and don’t think they’re incredible, then I blame the sauce. IF you don’t want to take the time to make my barbecue sauce from beginning to end, then you can mix 1 cup brown sugar with 1/2 cup Franks Red Hot, plus 2 tbsp corn syrup. Simmer that on medium low until the sugar crystals disappear. Mix with 1 small bottle of Sweet Baby Ray’s barbecue sauce. That will get you close.

So, just like roasting potatoes, heat your pan in the oven first, but this time to 450 degrees. Because there isn’t a lot of meat on chicken wings, you cook at a high temperature in order to get a crisp skin without overcooking the inside. When I bake chicken, I usually put some tin foil on the pan before putting it in the oven (yes, heating the pan will still prevent sticking when there’s tin foil on it).

While the pan is heating, put your wings in the ziplock bag, then add the oil and all of your spices – do not add the barbecue sauce. When cooking at high temperature, barbecue and other sugary sauces should only be added after the cooking process, or during the last part of the process. The sugars burn easily and if you cook with the sauce on them, they’ll taste bad.

Close the ziplock bag and toss it around until the pieces are coated with oil and spice evenly. Let the chicken sit in the bag for at least 15 minutes. Once the 15 minutes is over and your pan is nice and hot, take the pan from the oven and do this: 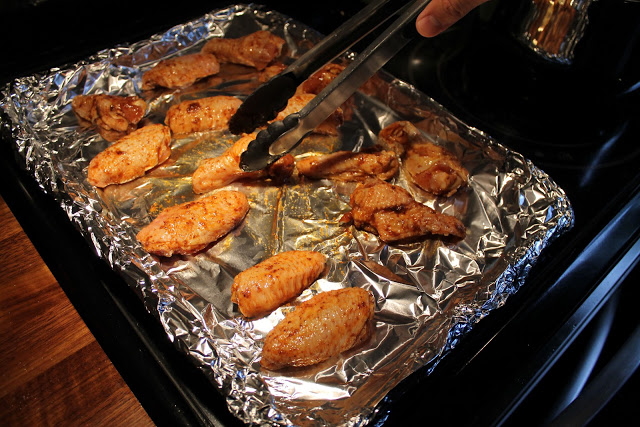 What that picture is showing is me pouring the chicken wings onto the pan spreading them out evenly (they need to be spaced out in order to get a crispy skin) and placing them skin side UP. Placing them skin side up allows the skin to get evenly crispy, but it also helps prevent sticking, as the skin is the part that sticks the worst.

Place the pan back in the oven (center rack, still at 450) and bake for 20-ish minutes. Heads up, there’s gonna be some smoking going on. Like, probably quite a lot. Sir Alton Brown (yes, I knighted him) says a good way to prevent this is to steam the wings first and let them sit on a paper towel for awhile. I tried this and it helped a little, but not really that much. The benefit didn’t match the effort, so I just put them in the oven and make sure I have my fan running when I open the oven door. The wings are done when the skin is mostly golden brown and crispy, maybe with some darker spots.

Take the wings out, put them in a bowl with some of the barbecue sauce, and toss to coat: 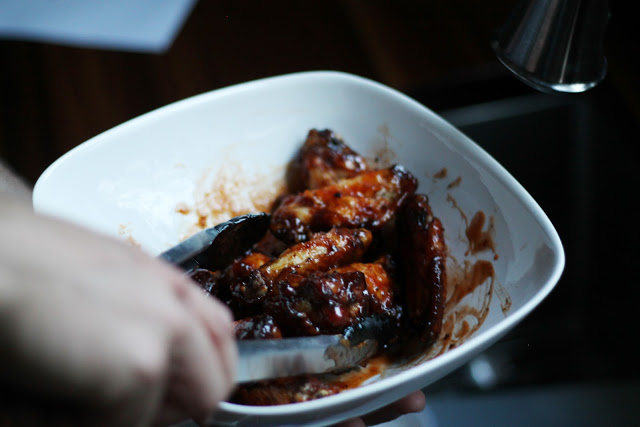 I find that topping with a little chopped green onion is a great way to add a bit of color and lightness. Finished product: 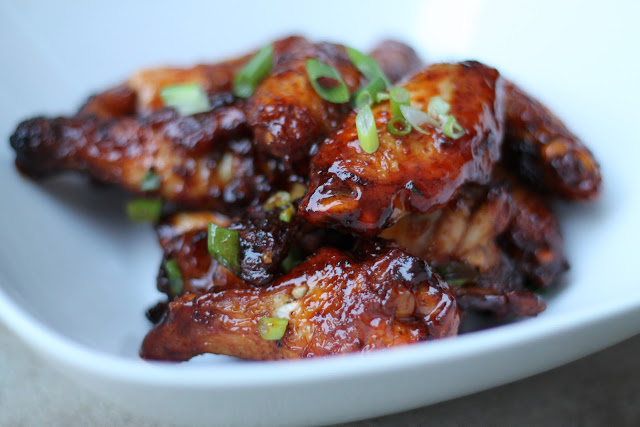 That’s it. We usually eat our wings with a green salad. You can dip them in ranch or blue cheese, but honestly it’s not necessary. And sometimes it just gets in the way. The pairing of spices along with the sweet spice of the sauce is so marvelous, and it’s super easy. I’m sure that once you try them, this recipe will soon be your “go-to” for wings as well.

PS. – as mentioned on the barbecue sauce post, this week is dedicated to dishes with my barbecue sauce. Use whatever sauce you want, but keep in mind it won’t be the same. Wednesday, awesome ribs you make in your oven. See ya then.


PPS. – we’ve had requests for more “traditional” recipe formats at the end of my posts. While I don’t care for traditional recipe format myself (people too often use recipes as a crutch), I know that a lot of people do, so we’re working on something for that. Stay tuned.