A Glider and a Revamped Ottoman

Last week our glider for the nursery arrived! I shared several I was deciding between here and ended up going with one I didn’t list–the Graham glider from West Elm. I almost went with the Sweep Swivel chair that I depicted, but after learning it just swiveled and didn’t glide, I decided on the Graham in Dove Gray. 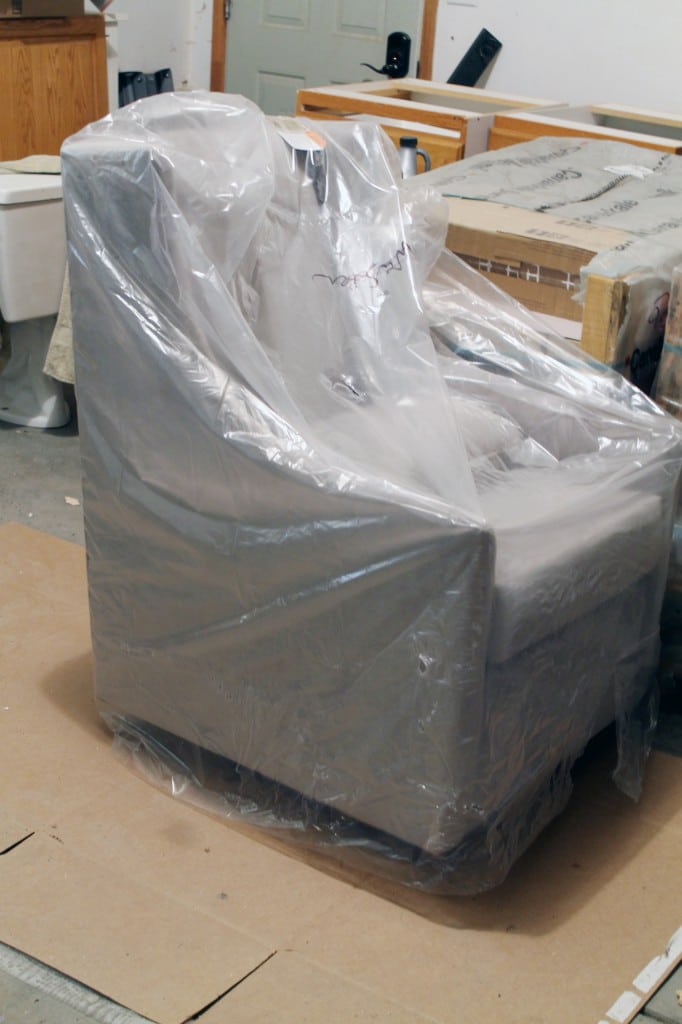 Sadly, we can’t unwrap it just yet because of our flooring project, but the chair is a good size and nice, warm and soft gray that can transition to any other room down the line. I pulled the trigger during President’s day, so I got a screaming deal on it–which is always a perk. 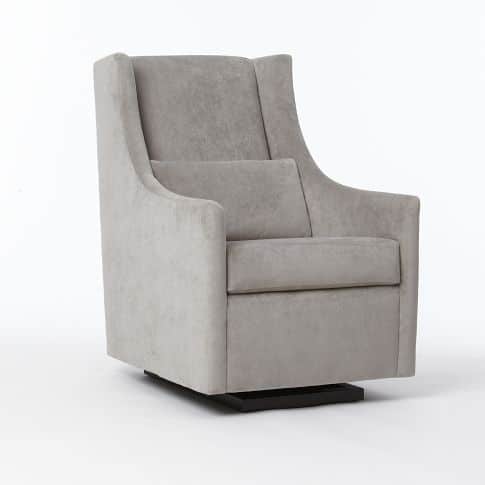 I opted out of the matching ottoman for a couple reasons. First, matchy matchy. But also, I don’t particularly like gliding ottomans. I prefer something to ground myself–something stationary I can push off of. Aaanndd, I already found this beaut for $2.50 at the thrift store: 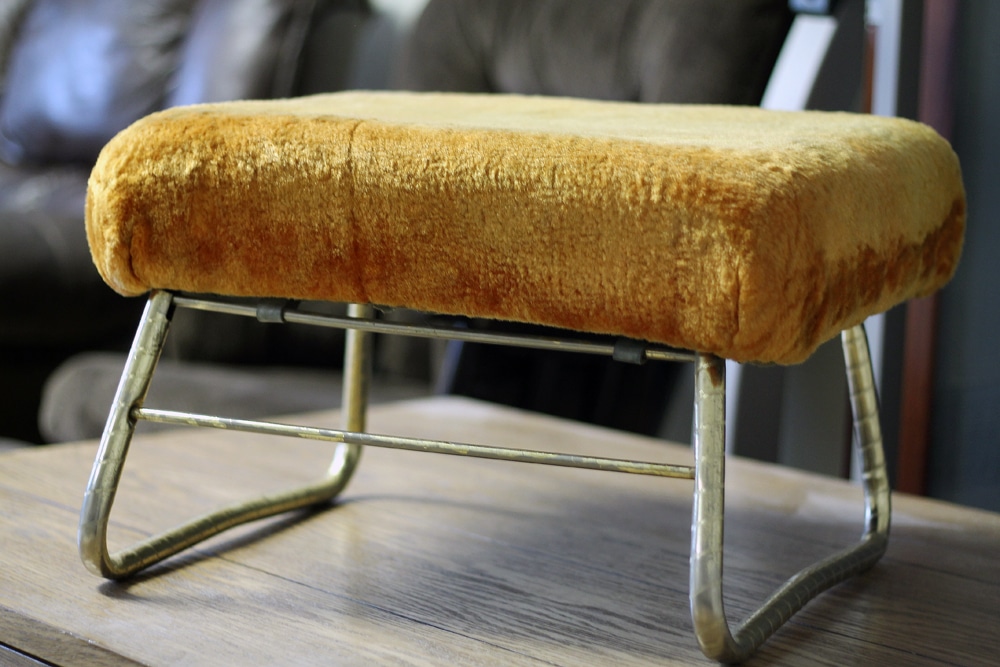 Okay, it’s not the most beautiful or vintage-chic find ever, but the height was right. It was stationary. Cheap and full of potential. In thirty minute’s time and with a few things I had around the house, I gave her a little makeover: 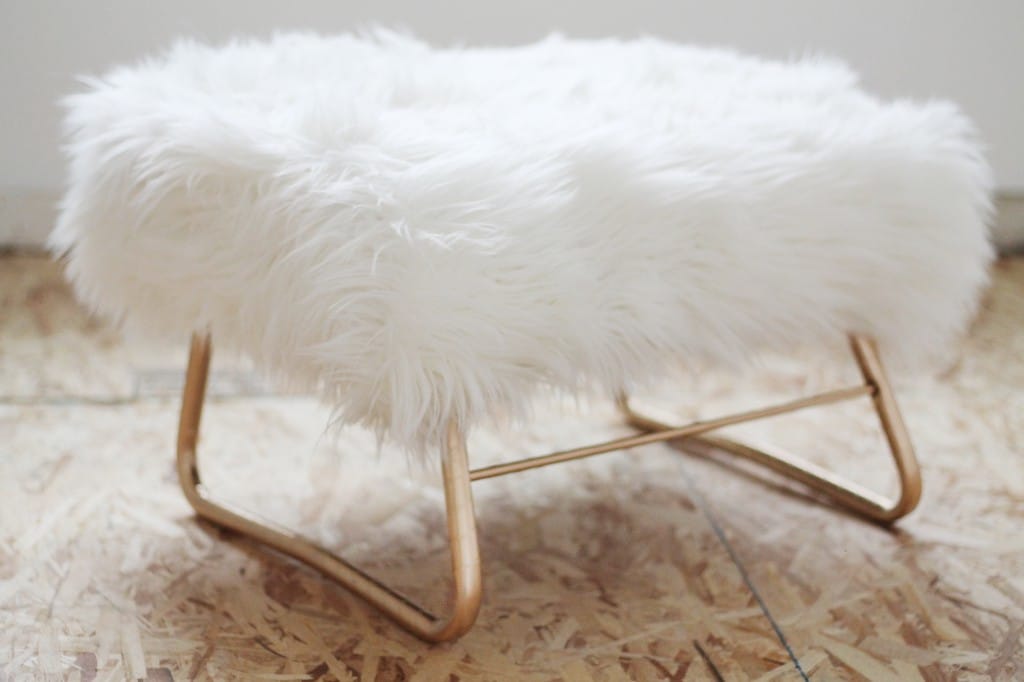 The legs of the ottoman were a fake, bad brass that had chipped in a lot of places. 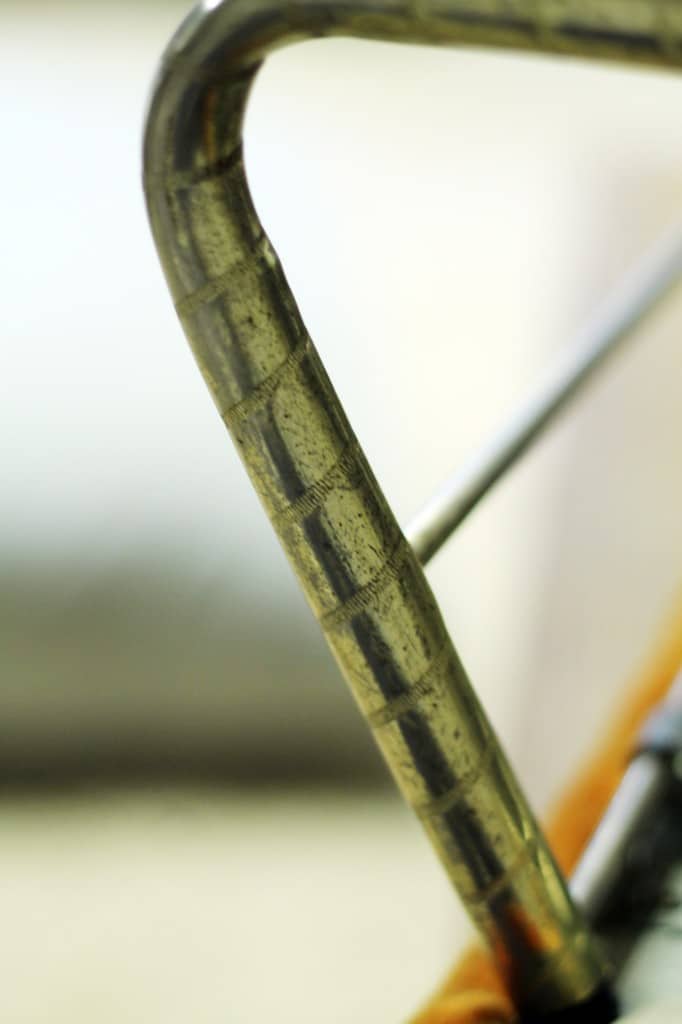 After unscrewing it from the top, I gave it a few light coats of gold spray paint (the same I used for the frame of baby F’s giant letter art here). 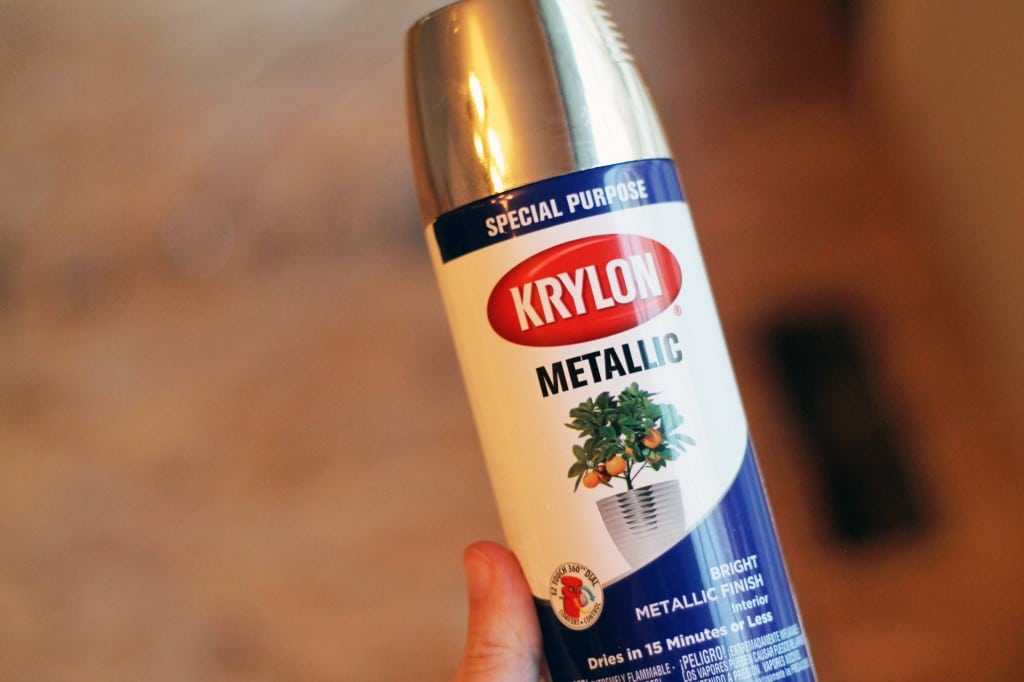 Krylon’s gold spraypaint is a little more of a rose gold, in my opinion–which is exactly what I wanted for this room so it worked beautifully. If you want something a little less rose gold and a truer brass or warm gold, this gold spray paint comparison post might be helpful. While the legs were drying, I tackled reupholstering the top. It just took one of Ikea’s faux sheepskins I had around the house and a little hot glue. 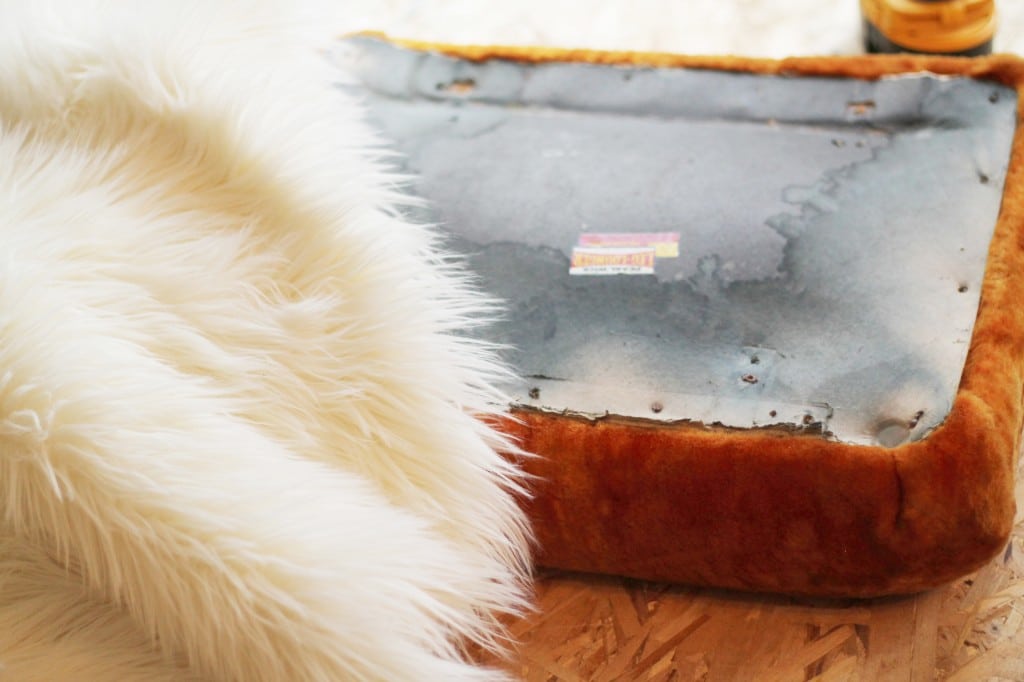 I started out using a staple gun, but the underside of the cushion was pretty much cardboard, so they wouldn’t stay secure. The glue gun worked much better. Also, word to the wise: cutting one of these faux furs is a little bit messy initially. I trimmed some of the edges and worried that I had made a critical error as it seemed the whole thing was unraveling. But after securing the edge in place with a little glue, I could see that just the long strands where I had cut had come off exposing a fluffy underside. Everything but that row was still attached. Just a head’s up, don’t panic. 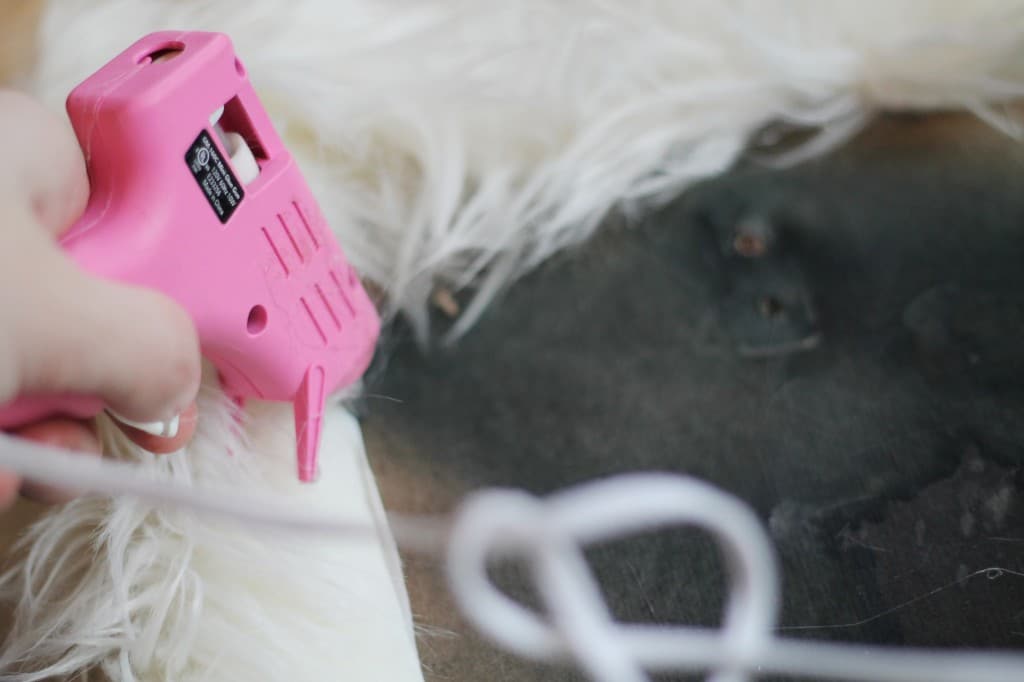 I reattached the base and that was that–my little thrift store score had a new life. 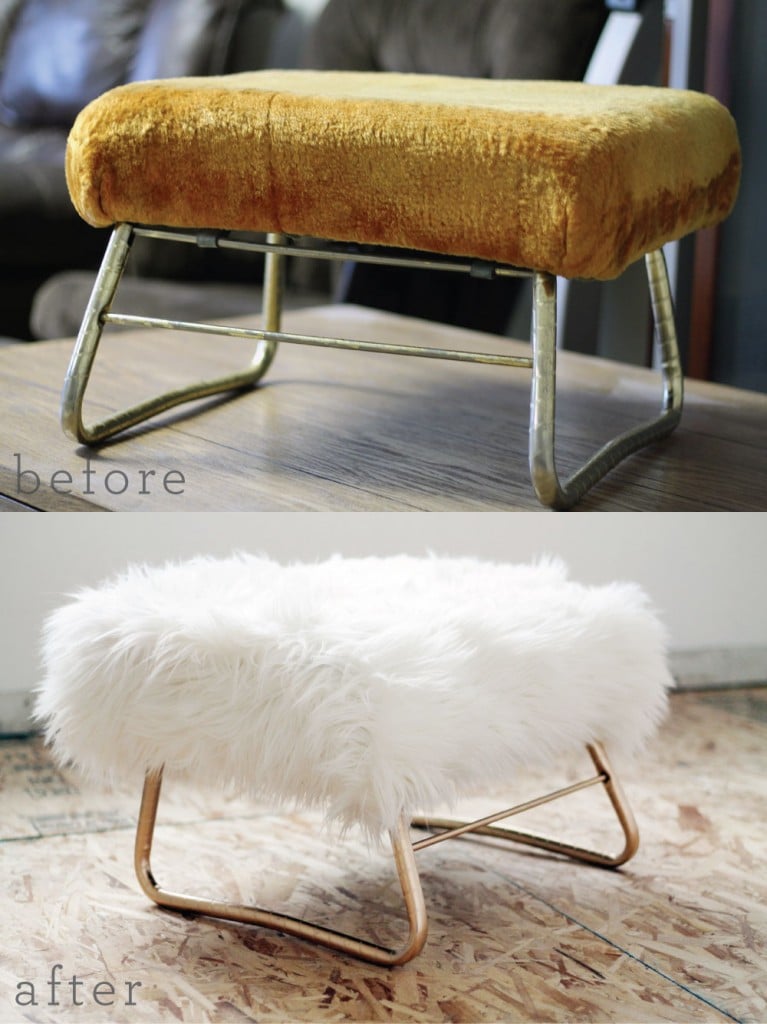 I like that it looks a lot more expensive than $2.50, or even $20 (for the faux sheepskin + spray paint + ottoman if I did have to go buy those)–but it’s not precious. I hope it lasts a good long time, but since it is living in the nursery, I feel so much better spending pennies on an ottoman I love maybe just as much as one I could have spent hundreds on. 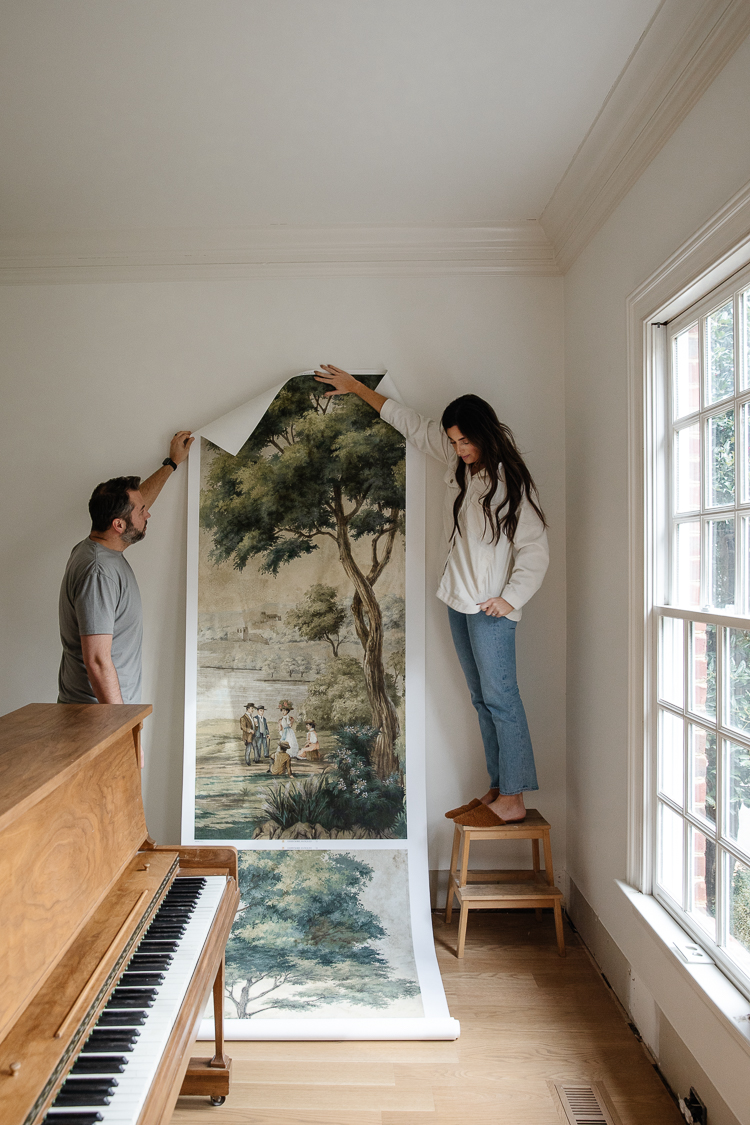 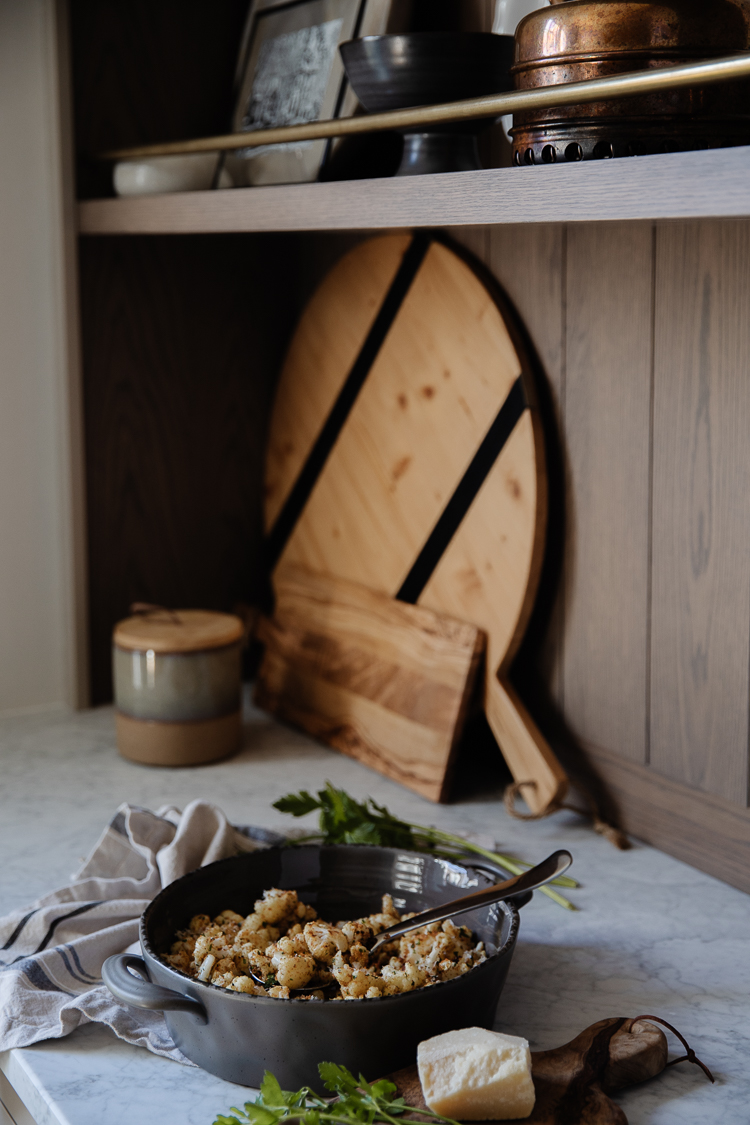 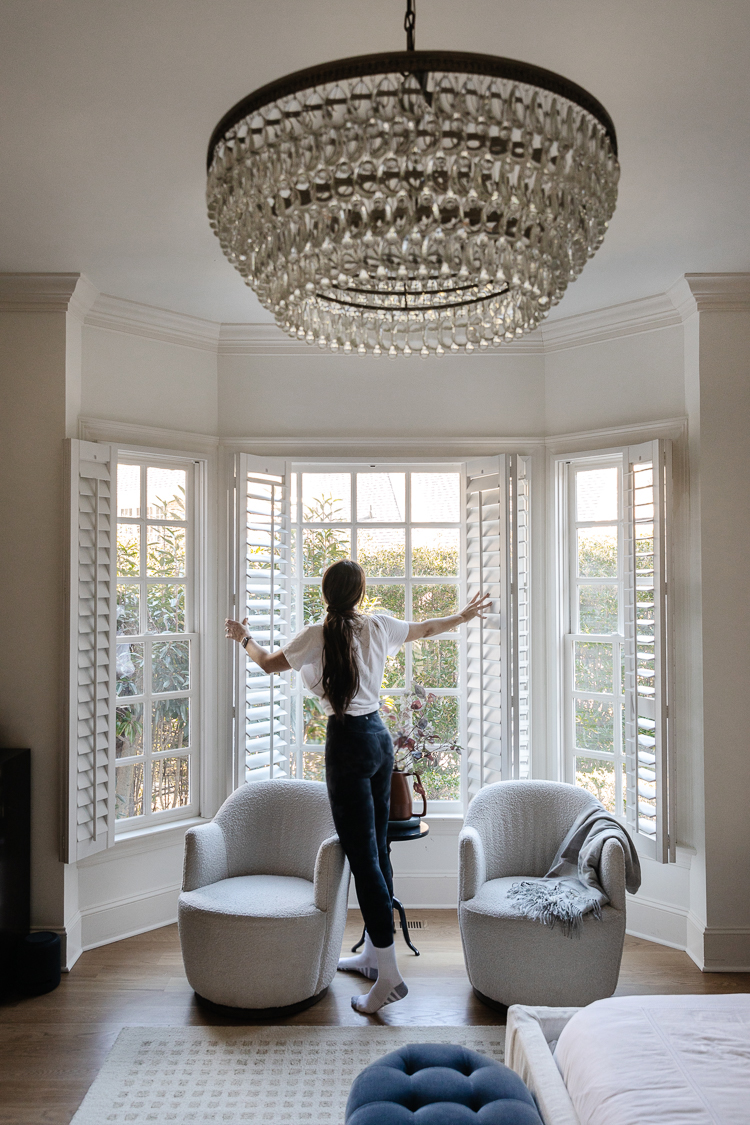 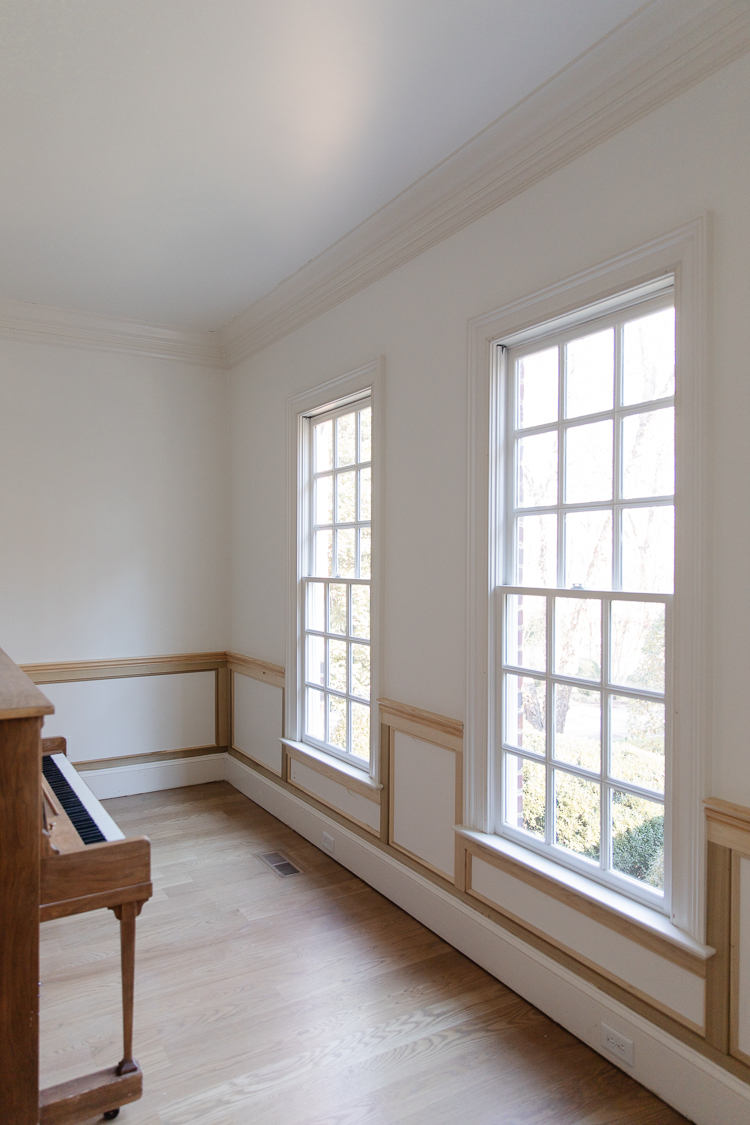 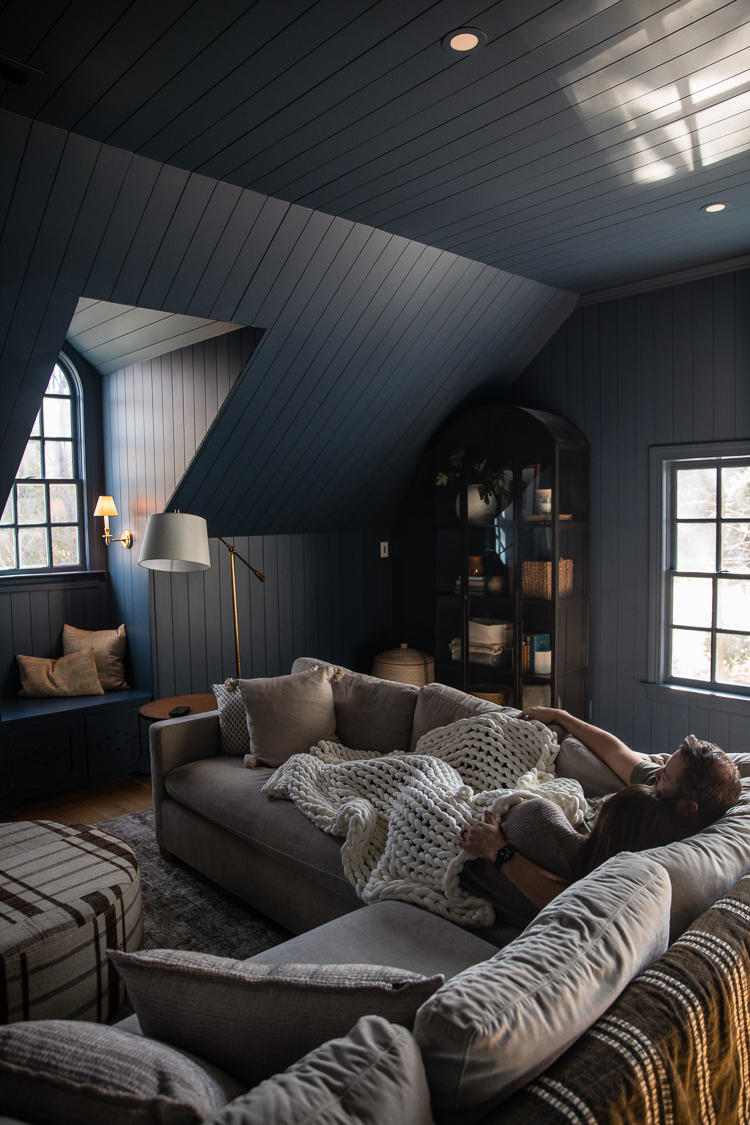 The Modern Day Appliance Garage: A Moveable Backsplash to Hide Our Small Appliances. 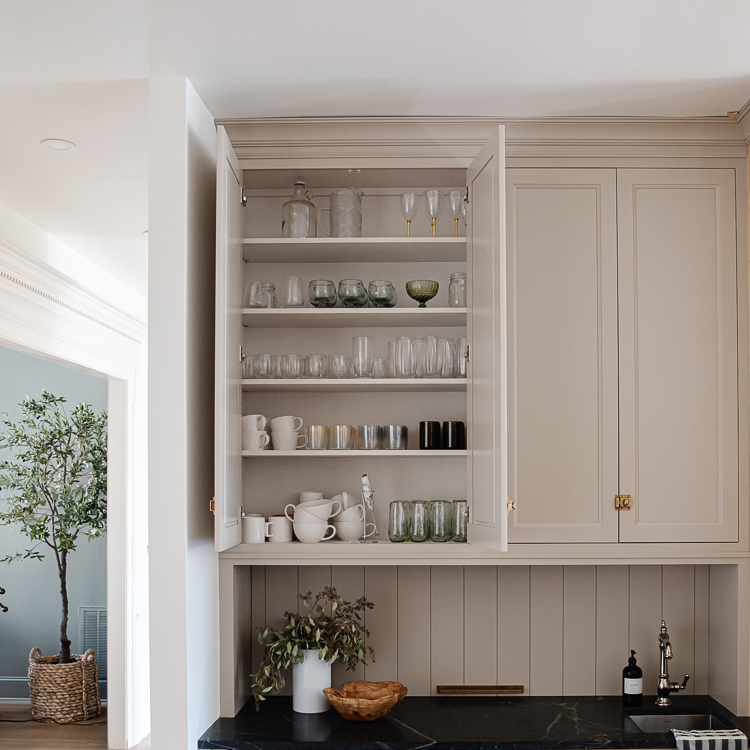 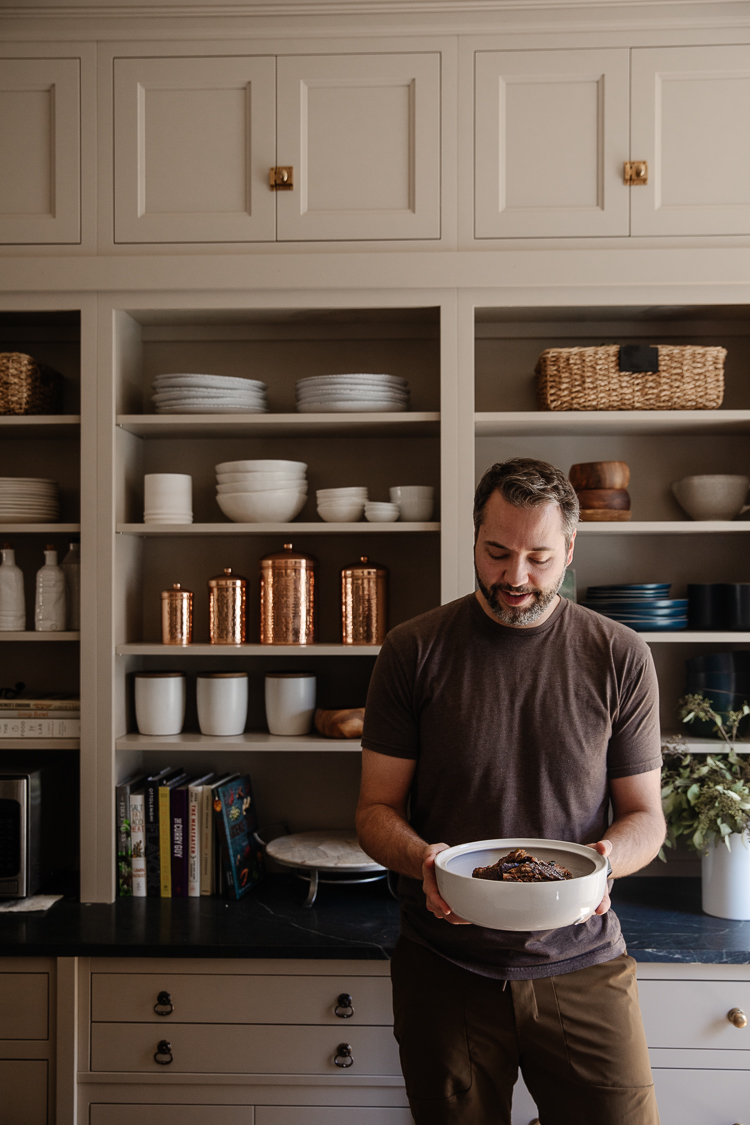 In January it’s really common to talk about upcoming trends, and I have done this in the past (2021 trends here)! It’s fun for me to see what’s up and coming, and to experiment with new patterns and colors that excite me. Being a trend forecaster can be tricky when I really try to preach making […]

Christmas Around Our Home 2021 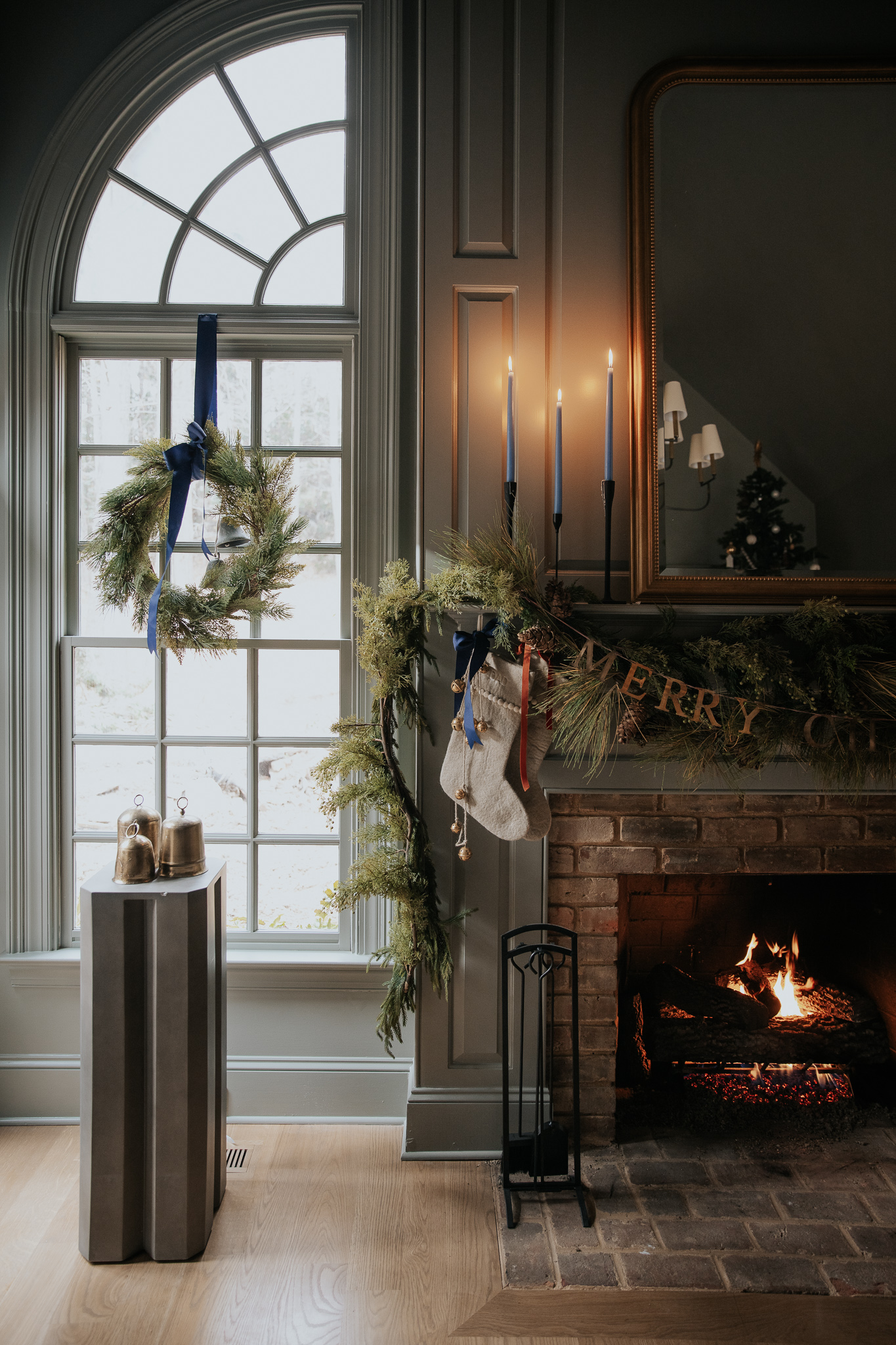 Spotting Our Loloi Rugs in the Wild 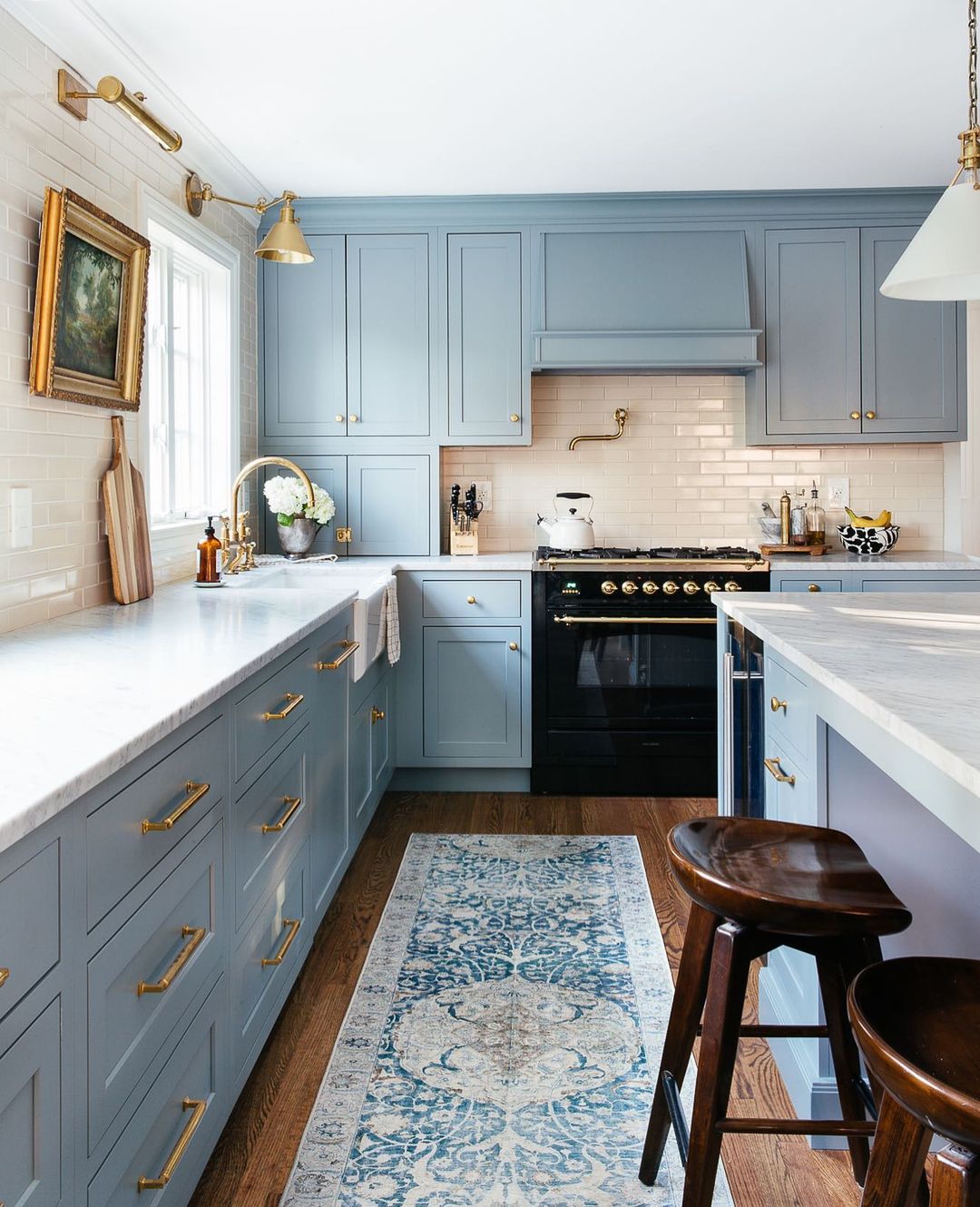 11 Ways to Mix and Match our Loloi Rug Lines